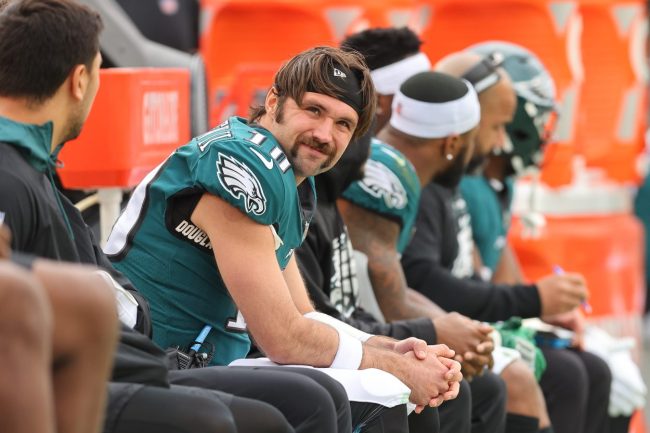 There is nobody in the NFL like Gardner Minshew. The 25-year-old has worked his way up from a three-star recruit to an (occasionally) starting quarterback in the NFL.

His path has certainly been unusual, but it suits Minshew, who is not the traditional type.

From the semi-small town of Brandon, Mississippi, Minshew plays into his somewhat “redneck” roots and rocks some incredible flow (he used to have an all-time mullet) and a Fu Manchu mustache at all times. Whenever he has the chance to wear jorts, he does.

After initially committing to play college football at Troy, Minshew left campus before ever taking a single snap. He instead transferred to Northwest Mississippi Community College before signing with East Carolina.

While there, he literally tried to break his own hand to avoid playing so that he would have an extra year of eligibility later in his career.

After two seasons with the Pirates, Minshew transferred to play for the pirate at Washington State and put up big numbers in Mike Leach’s offense. He finished fifth in Heisman Trophy voting and his legend started to grow.

And then, after being selected in the 6th round of the 2019 NFL Draft, Minshew was thrown into the starting role with the Jaguars. At that point, Minshew Mania exploded and he played pretty lights out.

Meanwhile, fans in the stands wore mullet wigs and fake mustaches. Minshew took the NFL by storm and prepared for a quarterback competition with Trevor Lawrence in year two by refusing to poop.

Ultimately, Lawrence won the job and Minshew moved on to the Eagles for 2021. After getting a start last season, playing a near-perfect game and beating the Jets, he and his father shared an incredible moment.

Now, it appears that Minshew is becoming a samurai.

On Thursday night, a shirtless Minshew shared a video of him in his backyard. His “mammaw” got him a samurai sword as a late Christmas gift and Minshew immediately went to work.

If the NFL doesn’t work out, Minshew has a career in martial arts.