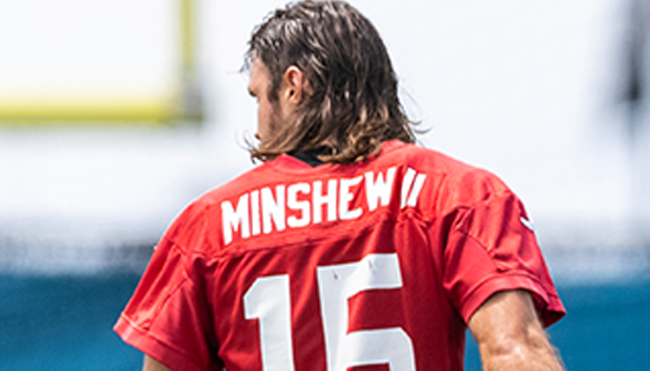 It’s safe to say the world wasn’t prepared for Garnder Minshew when he burst onto the scene a couple of years ago. Most people didn’t know too much about him when he took the field to replace an injured Nick Foles during the first game of his rookie season, but it didn’t take long for the world to get very well-acquainted with him after he proved he could hang with the big boys.

For a moment, it looked like the Jaguars had found a potential franchise QB in the form of the former Washington State player who routinely worked out while wearing nothing but sunglasses and a headband and got hammered on Jack Daniels before attempting to break his hand with a hammer to qualify for an injury transfer.

Sadly, that vision didn’t exactly pan out. As a result, the Jaguars earned the right to secure Trevor Lawrence with the top pick in this year’s NFL Draft. After being selected, the Clemson standout joked he was worried if his flowing golden locks could hold a candle to Minshew’s glorious mullet, but it looks like he doesn’t have anything to be concerned about any longer.

On Monday, the world was rocked by reports Minshew had rolled into training camp sporting a new haircut before pictures surfaced to confirm he made the decision to bid adieu to his signature mane.

As a result, he now looks like a sales rep who specializes in whatever the hell “business solutions” are.

Gardner Minshew’s mullet is gone, but what a run it had. We’ll always remember its beauty.

Minshew’s mullet may be gone, but it will never be forgotten.