Gardner Minshew Used To Exercise In Front Of Teammates Naked, Wearing Nothing But Sunglasses And A Headband 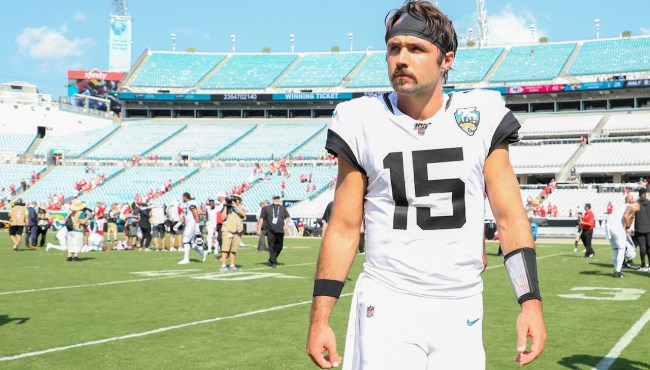 Ladies and gentlemen, out of the ashes rises the Phoenix, and we may have ourselves a new Bro King in Gardner Minshew rising from the ashes of Nick Foles’ shattered clavicle.

Foles, the former Super Bowl MVP and Philadelphia Eagles cult hero, had signed with the Jacksonville Jaguars during the offseason — Foles received a four-year, $88 million contract in April — as the team hoped he’d help propel an offense that was consistently letting down their already elite defense.

However, not even one quarter into the Jaguars season opener against the Kansas City Chiefs, Foles was forced to exit the game with a broken left collarbone after Kansas City defensive tackle Chris Jones landed on top of Foles as he threw a touchdown pass to wideout DJ Chark.

While Jaguars fans were likely extremely frustrated with their new franchise quarterback’s brief outing, the performance of the backup, Gardner Minshew, served as a beacon of hope, as the rookie out of Washington State finished the game 22 for 25 with 275 yards, two touchdowns, and an interception.

Luckily for the rest of us, though, it appears that not only is Minshew a decent quarterback, but he’s also a Bro King in the making.

According to Brian Floyd of The Athletic, when Minshew was at Washington State under equally eccentric head coach Mike Leach, he used to do “exercise bands in the locker room wearing only a jock strap, shades, and a headband” and would sometimes even be naked.

Yes, Gardner Minshew also does exercise bands in the locker room wearing only a jock strap, shades, and a headband. Sometimes naked, too. Sometimes Steve Spurrier even walks in on him doing it https://t.co/e2ZFwk3aOT pic.twitter.com/ir63VnKPZJ

And despite not knowing much about Minshew, is this really a surprise?

After all, the guy did play under Mike Leach, carry around vanilla Crown Royal in his jorts, and buy mattresses on Facebook Marketplace for $10. Oh yeah, he also looks like this:

Mark my words: if Minshew can make some noise on the field, he’ll become an instant Bro King off the field.