Curious About Area 51? No Problem – Allow Mike Leach To Tell You What’s Going Down At The Top Secret Military Base 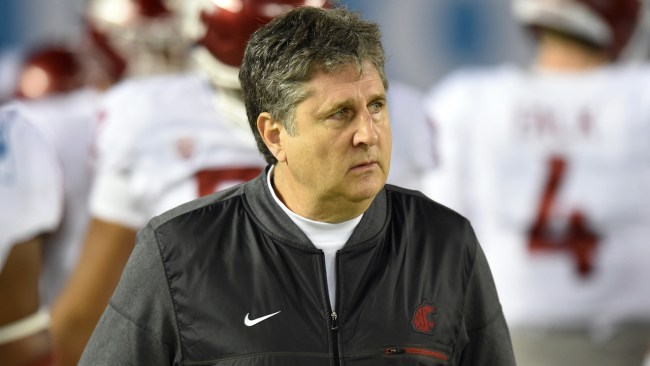 It goes without saying that Washington State University head football coach Mike Leach is one of the most interesting dudes in the world of college sports.

For example, the former Texas Tech coach has been known to have an extreme fascination with 18th-century pirates such as Blackbeard and Calico Jack, even going as far as lecturing his players on the history of pirates. Some have even said his office is essentially a museum of “pirate paraphernalia.”

He keeps a Viking ax by his bed. He has a law degree from Pepperdine University. He had a pet raccoon named Bilbo Baggins. He tweets stuff like this:

You get my point: the dude is out there in all the right ways.

So, ipso facto, when Mike Leach Tha Gawd launches into a soliloquy about what he thinks is going down at top-secret military base Area 51, you best listen, as you know what will follow is pure, unfiltered facts:

“I think that they test things there. I think stuff that the military and the government’s developing, I would imagine they test it there, you know, work with the prototypes and things like that there. If they have found space men, or any Roswell stuff, that’d probably be where they would store it, if there is such things. But I think it’s pretty much a test site where they test and develop everything from aircraft to bombs to some type of technology because there’s got to be a place to do that,” Leach said.

“I suspect that if they didn’t cryptically call it Area 51 and it didn’t have the eager, cold, no-one-allowed quality that it has, it probably wouldn’t be quite as exciting as it is. And of course, you throw aliens on top of that, and the curiosity goes wild.”

And because he was already diving balls deep into what’s going on behind the curtain at Area 51, Leach also gave some advice to those planning on storming Area 51 in a couple of weeks:

“I don’t think that would be a good idea because then they just might test out the stuff they’re testing on you to ensure that you don’t get in there. Our government lately has shown some resistance to enforcing laws around this country to the detriment of its citizens. I suspect those wouldn’t be laws that they chose not to enforce.”

So, there you have it, folks: the man himself has spoken, and it would behoove you to listen.