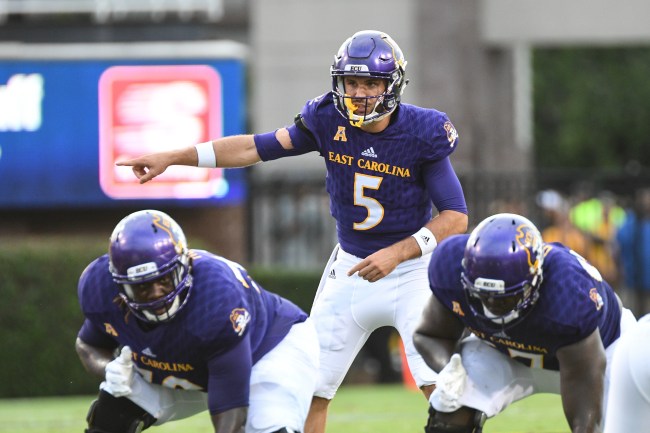 The legend of Gardner Minshew grew last night after the sixth round pick threw two touchdown passes in the Jaguars 20-7 win over the Tennessee Titans.

In just over two games since starter Nick Foles went down, Minshew has completed over 70 percent of his passes for almost 700 yards with five touchdowns and just one interception.

What’s his secret? Doing band stretches in the locker room with his hammer out cannot be underestimated in his success.

Speaking of hammer, the 23-year-old Northwest Mississippi Community College/East Carolina product recalled an incredible story on a recent episode of Pardon My Take about going to great lengths to try to extend his football career.

It was back when I was at East Carolina. It was my first year there. I went there from junior college and the situation was I had two seniors above me, so I was hoping to go in and redshirt and be able to play three (seasons). It was an awesome setup, you know?

So we get into game four, and we move our backup to running back because he was our best running back and then the starter got knocked out, concussion. So, shoot, I go in there, play about a half and then we get in for the next week and starter’s going to be back. So I’m like, ‘Dang, I just played a half and really wasted a half of a year on playing ball,’ ya know? So I was pretty pissed and started looking around at what my options were, and the only thing I could do would be to get a medical redshirt. But if I played in this next game, then that would be off the table.

So, I get an idea. I go home, I grab a bottle of Jack Daniel’s and I grab a hammer. I go back into my room and take a pull of Jack Daniel’s, put my hand down on the table and — Boom! Boom! Boom! 1, 2, 3 — hit the hell out of my hand, dude. I’m sitting there shaking, but I know it’s not broke, so I’m like, ‘God, come on.’ Take another pull. 1,2,3, again, still nothing, I’m just shaking at this point, man. I knew it wasn’t broken, so another pull, another three hits, and that was all I could take. I couldn’t break my own hand.

But when I told the guys, what would you do for more football? Because I’d do damn-near anything.

When asked whether he played the rest of the season at ECU, Minshew claims he played ‘some,’ but not before lying to coaches about the nature of his hand injury.

“I had a swollen-ass hand for about a few weeks. I just told the coaches I closed it in a car door.”

They say all true genius are a little crazy.