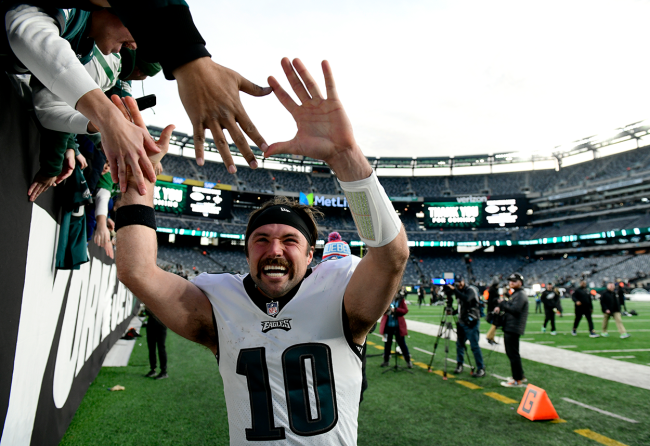 MINSHEW MANIA IS IN FULL EFFECT! After Jalen Hurts was ruled out with an injury, Minshew stepped in as the Eagles’ starting quarterback and led Philadelphia to a 33-18 win over the Jets on Sunday.

Throughout the entire game, Minshew was in great form. The 25-year-old Mississippi native completed 20 of 25 passes for 242 yards and two touchdowns. He also recorded a 133.7 passer rating, which was the highest of any Eagles quarterback since 2014.

The game was over before it even began.

Minshew showed up to MetLife Stadium in style, as he always does.

From there, he got off to a remarkable start. At one point in the first half, he was 11-of-11 for 165 yards and two scores with a perfect passer rating.

After the game, Minshew was fired up. He couldn’t hold back his emotions while heading into the locker room.

And then, during his postgame press conference, Minshew addressed how much fun he was really having. He is always serious, all the time. *wink wink*

"I'm always dead serious all the time. I would never, ever joke… especially in a game." – @GardnerMinshew5 pic.twitter.com/WVCValPWYN

The former Washington State gunslinger also talked about how much it meant to him being back on the field. He couldn’t help but smile and said that it was the best time he has had in more than a year.

.@GardnerMinshew5 on how it felt to be back on the field pic.twitter.com/gXVbFtKm74

After getting finished with the media on his way back to the team bus, Minshew shared a special moment. His father was in attendance at the game and when the two saw each other after the win, it was emotional.

Minshew, who could not have been more excited, gave his dad multiple, full-force hugs and even welled up.

You want to see how much this win and this moment meant to Gardner Minshew?

This is @GardnerMinshew5 after the game with an emotional moment with his dad, who tries to make it to every one of his games
🔥🔥❤️❤️ pic.twitter.com/lxOtlBmYrz

What a guy. What a moment.