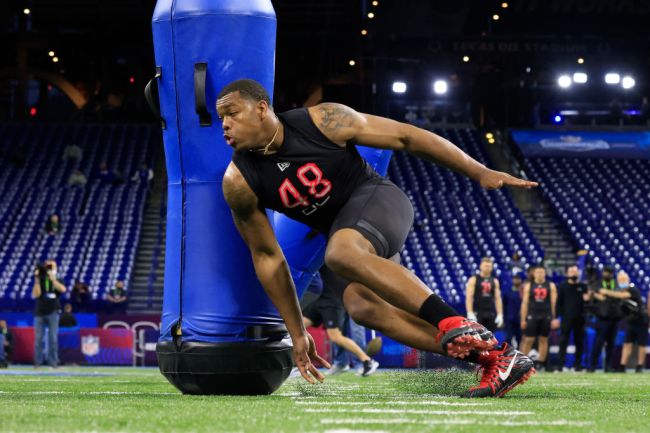 Two weeks ago, the Jacksonville Jaguars made Travon Walker the top pick in the NFL Draft, but that wasn’t always the move they were expected to make. Early in the pre-draft process, many believed they could use the pick on an offensive lineman. Then the expectation shifted to Aidan Hutchinson being the draft’s top pick.

Travon Walker slowly worked his way into the mix until he eventually the favorite for the pick at the start of draft week. There are still some who question whether the Jaguars made the right choice. While we won’t know for some time who the right call for pick 1 actually was, the jaguars head coach explained the team’s reasoning for their pick today.

Why did the @jaguars take Travon Walker @44Ytw over @AidanHutch97 and did @richeisen really frame the question to Doug Pederson the way he did? Check it out 👀 pic.twitter.com/B5lWCXNIWq

When it came to the decision to draft Walker, Jaguars coach Doug Pederson pointed to two factors. The first was that they had already taken care of their offensive line by bringing back Cam Robinson. Then he had this to say about taking Walker over Hutchinson:

“For us, it was the potential. The upside. The things that we saw. As coaches, we’re privy to a lot of film and a lot of conversations that a lot of people don’t get. A lot of information, and part of our job is to gain that information. We just felt at the time and even sitting here today that the best for our organization was Travon Walker. And that’s nothing against Aidan. I think he’s a great player and he’s going to have a great career in this league, but for us, we got to make a decision and we made it. Love everything about Travon. We get him in here this weekend for our rookie minicamp and we’re excited to go to work with him.”

If upside is what the Jaguars were looking for then Hutchinson definitely wasn’t going to be the right call. Hutchinson had one of the safer floors in the draft, but doesn’t project to have quite the same ceiling as Walker or even 5th pick Kayvon Thibodeaux.

Now the Jaguars just need to hope that upside pick was the right call or they’re going to have a really hard time working their way out of the bottom of the NFL standings.