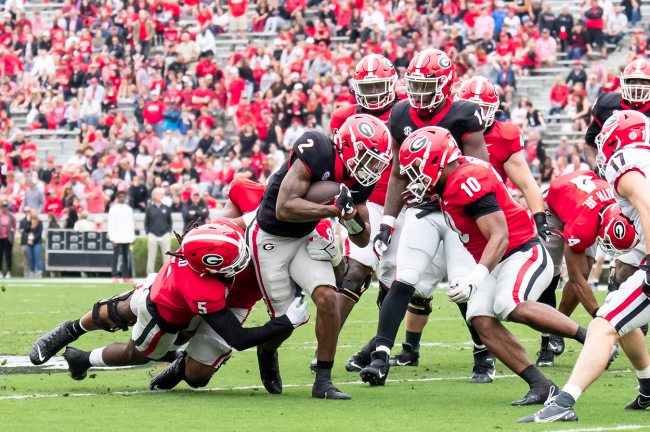 Georgia football is coming off of its first national championship in more than four decades and there is a lot of hype around the 2022 season in Athens. As the Bulldogs took the field for its first padded practice of the year, there was a lot of buzz amongst NFL scouts.

#UGA puts on the full pads for first time in fall camp today. I am told they are expecting scouts from at least 19 different #NFL teams in Athens today. pic.twitter.com/b09Dqi4TOj

For NFL scouts to be at a fall practice before their own season kicks off in a few weeks is not uncommon. Many of them will be back in Athens throughout the fall as the NFL Draft picture starts to take place.

However, for there to be more teams in attendance at the first padded practice of 2022 for one program than those that aren’t is rather unprecedented. It is a lot of scouts and the majority of them, presumably, are there to see one player in particular.

Georgia’s defense in 2021 was one of the best of all-time and Travon Walker was drafted No. 1 overall in April. But he wasn’t even the best defensive lineman on his team.

While young players like Broderick Jones and Kelee Ringo are already turning heads, it is Jalen Carter that is likely drawing all of the early-season attention. The 6-foot-3, 310-pound defensive tackle could very easily end up being the second Bulldog defensive lineman to hear his name called first at the NFL Draft in back-to-back seasons.

That’s crazy and as a result, the NFL is showing out to Georgia’s fall camp.