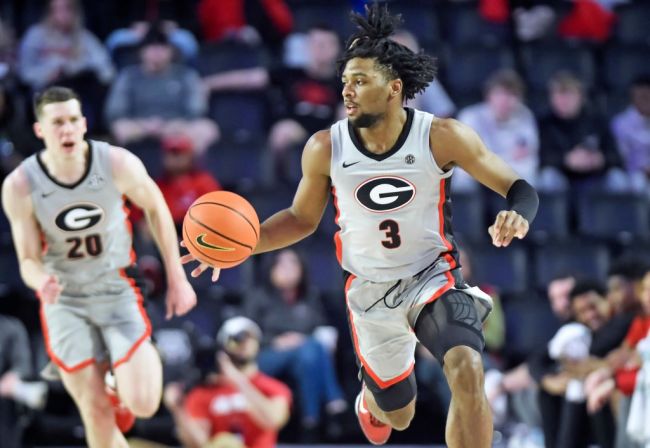 Georgia and Tennessee met in an SEC battle in Athens tonight with Tennessee still fighting to lock down their seeding in the NCAA tournament and Georgia trying to… um… not give up on their season.

The Volunteers entered the matchup as heavy favorites, but one Georgia Bulldog made sure to let them know in the 1st half that they wouldn’t be going down without a fight.

With just over 8 minutes left in the first half, Georgia’s Kario Oquendo caught a pass from a teammate while curling to the basket. His first step got him past his defender. From there, he only needed a dribble and a couple more steps from the 3-point line to get in range to take off.

Unfortunately, Tennessee’s Santiago Vescovi decided to step in front of Oquendo to try and take a charge. It didn’t go well.

Not only did Vescovi guarantee he’ll end up on the wrong end of a highlight on SportsCenter’s top 10 tonight, but he also got called for a block in the process. Luckily for Vescovi, Oquendo would fail to complete the 3 point play for Georgia to maybe take away a little of the sting.

The Georgia Bulldogs, who currently find themselves in last in the SEC, have been putting up a fight in their last home game of the season. The dunk put them ahead by 6 points and they were tied with Tennessee at the half.

For Tennessee, this is a must-win game. They are currently ranked 13th in the country and are viewed by some as a 3-seed in the NCAA tournament, but a loss to Georgia, even on the road, would be a major blow to their resume.

Georgia may have gotten the highlight reel moment in the first half, but Tennessee will be hoping they can turn things around and leave Athens with the win.