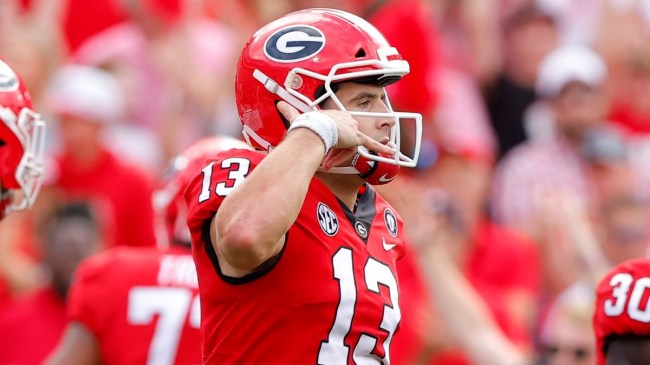 Much of the college football world had not even heard the name Stetson Bennett 18 months ago. Fast forward a bit and Bennett is the star quarterback of the reigning national champion Georgia Bulldogs. The Dawgs are undefeated again in 2022 and look primed and ready for a run at back-to-back national titles, and Bennett is now a household name.

The sixth-year quarterback has been lights out for Kirby Smart and the Bulldogs. He’s completing 67.6 percent of his passes for 2,895 yards and 14 touchdowns against just five interceptions. As Bennett’s star has grown, so has his NIL value. On3 Sports values Bennett at $985,000 annually. That’s 13th among all college football players and 24th among all college athletes.

But Bennett isn’t exactly the most charismatic college athlete around. Sure, the guy they call the mailman because he always delivers has grown into his role as a star quarterback for the nation’s best team. But it hasn’t always been the easiest transition.

In the ad, Bennett acts as if he’s called a media conference to announce that he had changed his nickname from The Mailman to The Milkman.

“Yes, the mailman delivers. But sometimes you get junk mail,” he said. “And I want to deliver great things every time I’m on the field. So from now on, I’ve decided I will be the milkman.”

Beyond the obvious milkman jokes to be made (and trust me, there are plenty), Bennett’s delivery is extremely cringeworthy.

But Bennett likely won’t care. His Bulldogs are rolling and won’t be challenged again until the SEC Championship Game at the earliest. If he can deliver Georgia yet another national championship after a 42 year wait previously, Bennett could make a living off milkman ads for the rest of his life.