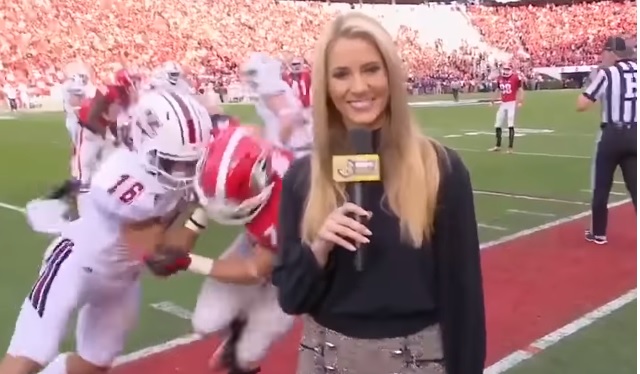 During this weekend’s Georgia- UMass game ESPN sideline reporter Laura Rutledge got absolutely crushed on the sideline while doing her job.

Watch as Rutledge had her back turned to the field and was delivering a live report when Georgia running back Prather Hudson ran into her on the sidelines while trying to block a UMass player.

Rutledge took the embarrassing moment in stride and later joked about the collision on Twitter.

Took an L in Athens today. So many thanks to everyone at @UGAAthletics for their help after this happened…even though I’m a Gator 😏 pic.twitter.com/b1FTCPaqtH

Hudson saw Rutledge’s tweet and decided to shoot his shot.

Hey @LauraMRutledge really sorry I knocked you down, but… I can pick you up at 7 😎 https://t.co/jkHsTsLk0s

While Rutledge was amused by hudson’s brashness she quickly shot him down by revealing that she was married.