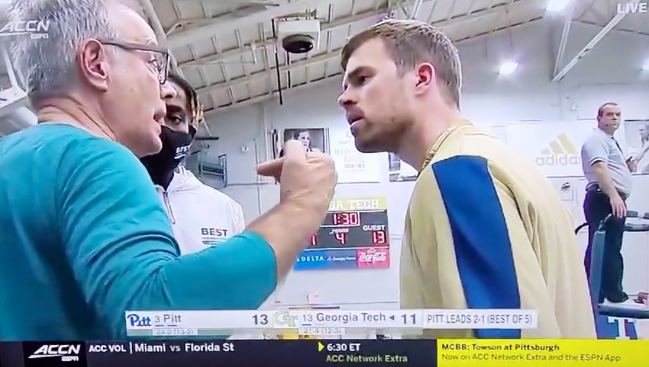 No. 13 Georgia Tech women’s volleyball hosted No. 3 Pittsburgh in front of a packed crowd on Friday night. However, one fan was not able to stick around and watch the end of the match.

The Yellow Jackets took the first set 25-17, but the Panthers roared back to win the match 3-1 with three close sets. During the fourth and ultimately final set, a man in the crowd did not agree with the up-ref’s call.

The grey-haired man, wearing a tight teal shirt and glasses, immediately got on the officiating and let the crew know that he disagreed. As a result, the match was halted and the man was pulled from the crowd.

He tried pleading his case to the Georgia Tech officials, but was asked to leave. The man swiftly walked back up the bleachers and gathered his belongings before being escorted out of the arena.

On his way out, the man decided to let everybody know how he really felt and flipped his right middle finger in direction of the up-ref. He looked directly at the official and gave him the middle finger directly to his face.

“You obviously just can’t do that,” the announcer said on the broadcast. It was hilarious and the Georgia Tech team was loving it.

Take a look at the incredible exchange:

This man may not have been able to watch his Yellow Jackets try to battle back, but they were unable to do so, so he didn’t miss much and made his statement in the process. A success, if you ask me.