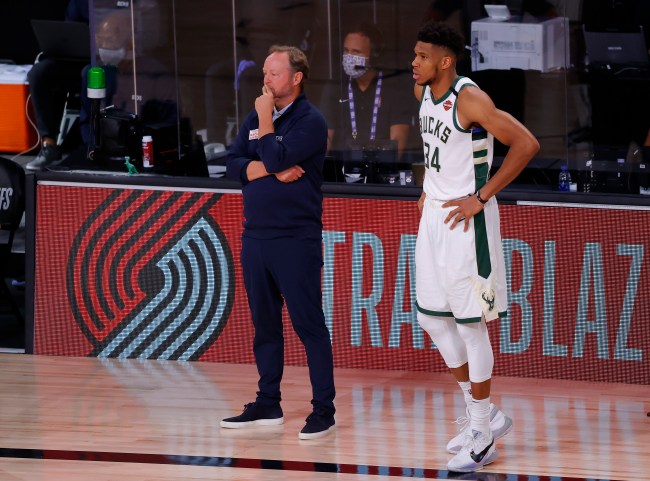 Jimmy Butler absolutely torched the Milwaukee Bucks for 40 points in game 1 of the Eastern Conference semifinals and it doesn’t seem like defensive player of the year Giannis Antetokounmpo has any interest in guarding the Heat forward late in games going forward.

After Butler scored his career playoff-high in points during the Heat’s game 1 win, Giannis was asked why he didn’t ask coach Mike Budenholzer to have him switch on Butler late in the fourth quarter. The Bucks star immediately got defensive about being asked that particular question and asked the reporter why he would ask that.

Bucks’ Giannis Antetokounmpo on whether he asked to switch onto Heat’s Jimmy Butler during late-game explosion: “To guard him? No, I didn’t. Why would you ask that? I’ll do whatever coach wants me to do.” pic.twitter.com/IFpR5pk1s1

Giannis’ was then blasted by former NBA players and fans for his response.

He asked that cuz you are the Defensive player of the year and Jimmy just had a career high 40. My question is why did YOU ask him why did he ask that question 🤷🏽‍♂️🤔 https://t.co/J69zIzKOty

As a competitor and DPOY that’s your job to take that assignment. I know Marcus smart, Avery Bradley, kawhi woulda been like FOH I’m guarding him. https://t.co/kEHStlPiJU

Shiiiiiiiiiiid he should’ve asked him for the assignment. DPOY and you aren’t guarding their best player? Come on man. https://t.co/r09NXNQxHh

An All-Star suggested to me that Giannis Antetokounmpo shouldn’t be the Defensive Player of the Year because he’s not a lockdown defender who shuts down other stars. The Bucks clearly need someone to take that challenge with Jimmy Butler. https://t.co/JvH2PAicNG

It seems the 2020 DPOY is unable to understand he should be guarding the best player on the other team… hmmm… https://t.co/eSiCdaSbkh

You’d do that……..cause you’re (allegedly) the best defensive player in the league? Am I missing something? https://t.co/Mw7FcS5oo6