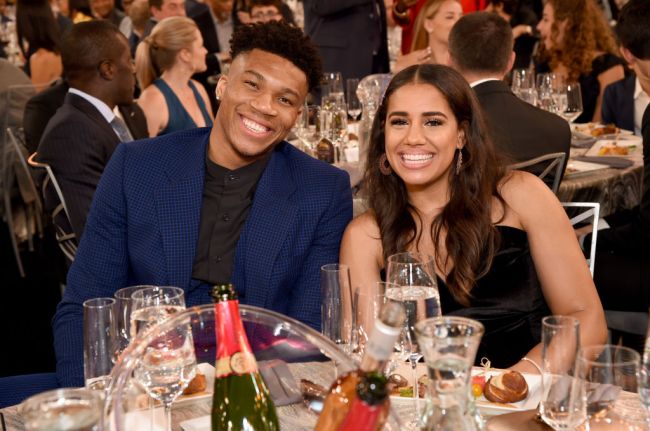 Giannis Antetokounmpo’s longtime girlfriend Mariah Riddlesprigger has apparently been keeping up with Kendrick Perkins’ hot takes about her boyfriend.

For the majority of the Bucks’ playoff run, the former NBA player turned ESPN personality dubbed Giannis “Robin” to Khris Middleton’s “Batman” because he felt Middleton was a better “closer.”

Kendrick Perkins really said Kris Middleton is Batman and Giannis was Rodman. He should be fired at 11:59pm tonight for such a asinine statement. SMH they hire anybody to do tv SMH‼️ pic.twitter.com/LpNY0qKDWD

If Giannis happens to finish the mission and win a NBA Title along with a Finals MVP…I will issue a public apology like I did for Steph Curry until then…..Khris Middleton is still the Batman/Closer! Carry on… https://t.co/AL7Ffq7bBx

Perkins would later change his tune during the last two games of the NBA finals after Giannis put up historic numbers and his Middleton take made him look extremely dumb.

After Giannis dropped fifty points to lead the Bucks to an NBA championship, Riddlesprigger took to Twitter to mock Perkins by referencing his “carry on” catchphrase for his criticism of her boyfriend during the playoffs.

As for Perk, he eventually got called out by his colleague Jalen Rose on Wednesday morning over his Giannis hot takes.

Jalen Rose roasts Kendrick Perkins on ‘Get up’ this morning for his Hot Takes on Milwaukee pic.twitter.com/ZvdsSp74XH