THIS LEAGUE! James Harden Yelled At Giannis Antetokounmpo For Taking Too Long With His Free Throws 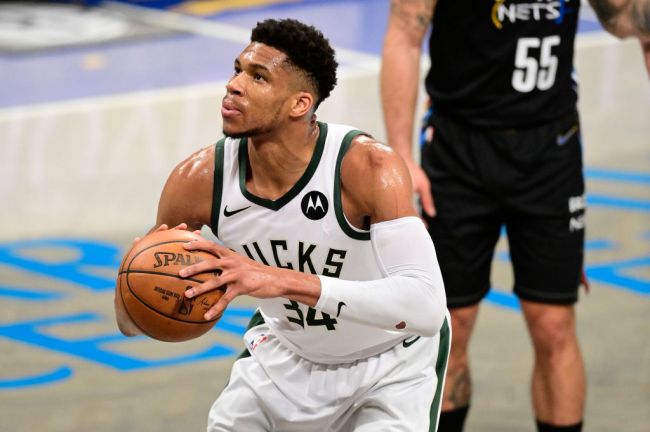 Watching one of the world’s greatest athletes attempt one of sports’ most simple tasks is fascinating. Giannis Antetokounmpo shooting a free throw is no exception. The 26-year-old is already a likely Hall of Famer, but he struggles at something that announcers routinely call a charity stripe.

It is literally called a free throw.

He is a big, athletic player, so it makes a lot of sense to foul him and send him to the line instead of letting him go to the hoop. In the first five games against Brooklyn, Giannis made 15 of 36 foul shots. That’s 41.7%.

It’s hard to attribute Milwaukee’s losses to his woes, but Games 1 and 5 could have gone differently with a few made free throws. His struggles have become an easy target for opposing fan bases and they have been very loud throughout the playoffs.

Giannis’ herky-jerky motion takes a lot of time and Heat fans started counting how long he took in unison.

Heat fans counting down Giannis during his free throws 😅 pic.twitter.com/Bhji5lvHbu

Listen to the announcer accuse the Miami faithful of counting too fast. He was proved wrong in Game 6 against the Nets on Thursday. Giannis was taking for. ev. er.

And then they say us Heat fans were counting too fast…#NBA@HeatvsHaters pic.twitter.com/4TgUTX626g

BK faithful took a play out of the Heat playbook and counted how long he was taking. Toward the end of the early first quarter attempt, you can hear James Harden yell “YO!” and see him throw his hands up.

Nets fans are LOUDLY counting how long it takes Giannis to shoot a free throw 😂 pic.twitter.com/7aToYXxy4c

Harden’s patience only got worse as the game went on.

This outward frustration comes on the heels of a 10-second violation called against Giannis in Game 1.

What’s interesting is that Giannis’ pace is not consistent. He was putting in extra work before Game 6 and each attempt was different. The same is true in-game.

Giannis is putting in work at the free throw line two hours before tip-off. pic.twitter.com/Mpoouwk2iS

Giannis’ tempo was so poor that even Doris Burke chimed in on the broadcast.

YES DORIS IT DOES TAKE SO LONG