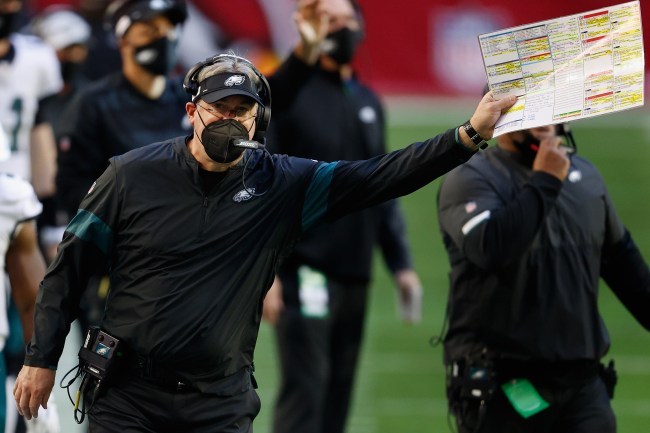 The Eagles-Washington game was fairly competitive for nearly three quarters but then the Eagles did something fishy and benched starting QB Jalen Hurts for third stringer Nate Sudfeld.

Nate Sudfeld is now coming into the game for the Eagles to replace Jalen Hurts at QB. pic.twitter.com/mnygTYWE6C

Things went south for the Eagles fast and Washington went on to pretty much handle the game after Sudfeld went in.

It was also pretty obvious that the Eagles were tanking the game on purpose.

Considering that the Giants were eliminated from the playoffs because of Washington’s win the team’s fans were angry at the Eagles for tanking during the game for a better draft position.

The Eagles get the 6th pick if they lose. They get the 9th pick if they win. Pederson won’t admit to this being the reason postgame. I assume (hope?) for his sake he has organizational approval to do this because this is as blatant as tanking gets in the NFL. https://t.co/a38P3bsSSS

The NFL flexed the Eagles Washington game to prime time and they’re rewarding them by blatantly tanking. This can’t be legal.

This is the definition of Tanking a game in pro sports!! Hate to be a @Giants fan.. Wow @Eagles #NFL

This stunt by Doug Pederson isn't really about the Giants, at least it shouldn't be.

This has to make the rest of the league angry as hell.

EAGLES ARE TANKING THIS GAME . THEY PUT IN NATE SUDFELD LOL@Giants FANS ARE SO PISSED RIGHT NOW

I think the eagles just hate us more than washington. That’s only thing that could make sense right?