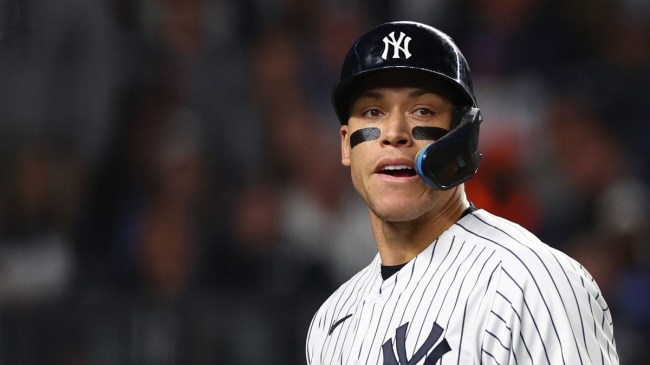 The race to sign Aaron Judge is heating up as rumors are spreading quickly. While the New York Yankees may have pissed off the superstar outfielder, the San Francisco Giants are busy offering him a hefty contract. We’ll see how it plays out, but the fans believe this deal could be enough to sign Judge.

According to Jon Heyman, the Giants offered Judge in what is “‘believed to be’ around $360 million.” It’s unknown how long the duration of the deal is, but for now, that seems like a strong offer.

The Giants have made an offer to Aaron Judge ‘believed to be’ around $360M, per @JonHeyman pic.twitter.com/4MYydEAZ3Q

Aaron Judge has yet to sign any contract, but he clearly has some choices to make. It’s noteworthy to know that although the Giants made a strong offer, the Yankees still seem to be the favorite to sign Aaron Judge, per Jon Heyman.

Giants are in with a big offer to Judge — believed to be $360M neighborhood — but the assumption/belief among rivals is that the Yankees remain favorites. Yankees are hopeful but say they still don’t know.

Although that’s the case, Giants fans seem happy with the offer. Even though there is no guarantee Aaron Judge will sign that contract, the fanbase believes it could be enough to get the job done.

it’s done . He is flying to the bay today afternoon

Maybe the Yankees could make an even bigger offer than the Giants. It’ll be interesting to see how it plays out.

It’s not a confirmation, but the fanbase sure thinks it is.

Keep an eye on Aaron Judge as he could make his decision at any given moment. Although there is some drama brewing in New York, you can’t count the Yankees out just yet.