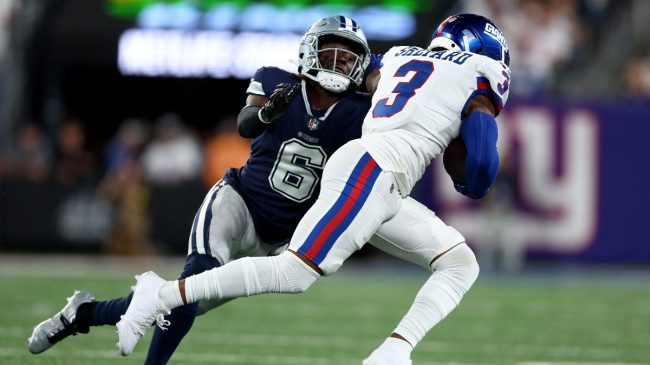 In the final play of the game, New York Giants wide receiver Sterling Shepard fell to injury. It was a non-contact incident and Brian Daboll confirmed the bad news. Shepard has suffered a serious knee injury and is out for the remainder of the 2022 season. However, the injury has generated a public outcry for the NFL to ban turf fields once and for all.

Sports Injury Central shares a clip of the injury. It’s not gruesome, but it is surprising. Sterling Shepard is seen essentially jogging down the sideline. Out of nowhere, he falls to the ground, clutching his knee in pain. It’s well known amongst the football world that it’s more likely to sustain a lower-body injury on turf fields than on grass. For that reason, NFL and Giants fans alike are calling for a serious change within the league.

By video, our panel of doctors have significant worry #Giants WR Sterling Shepard suffered an ACL tear on this play pic.twitter.com/IXPqVkg0nf

This isn’t the first knee injury the Giants receiver has suffered from. So, there is a possibility Shepard had some unknown lingering issues. Regardless, the amount of injuries sustained on turf fields in the NFL is quite alarming. Fans and players definitely make a strong case as to why the NFL should remove turf fields.

It truly is crazy to see. Hopefully, Shepard makes a quick recovery.

Man do i hate turf

I think the Jets and Giants should switch to a grass field at MetLife Stadium. Research suggests these types of severe injuries occur more often on artificial surfaces. That’s why the NFLPA has been pushing for all teams to play on natural grass.

We don’t get it either.

How that turf still exists is insane

Maybe one day the league will wise up and make the change. Until then, playing on turf fields is something the Giants and many other football teams will have to play on. Here’s to a quick and healthy recovery for Sterling Shepard!