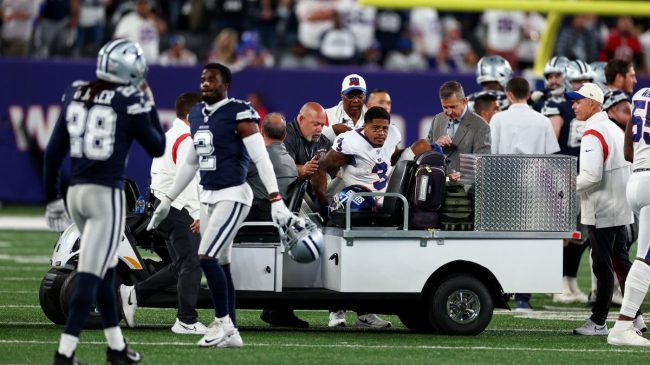 The New York Giants began the 2022 NFL season about as strongly as fans could have hoped for. The Giants jumped out to a 2-0 start under first-year head coach Brian Daboll. Running back Saquon Barkley looked back to an All-Pro level and Giants fans packed in MetLife Stadium on Monday for a huge rivalry game against the Dallas Cowboys.

Then it all came crashing down.

The Giants blew a 13-6 late-third-quarter lead to fall to Dallas, 23-16. But that was only part of the problem. The loss was exacerbated by a late injury to wide receiver Sterling Shepard that forced him to be carted off the field.

Shepard has an extensive injury history, having torn his Achilles a year ago and suffered a number of concussions in his short career. The latest incident looked every bit as bad as fans quickly speculated that Shepard had torn his ACL. Even ex-Giants wide receiver Odell Beckham Jr. was upset.

Now it appears that he was upset for good reason.

Daboll met with the media on Tuesday and didn’t have positive news to deliver on Shepard’s diagnosis. Instead, the Giants head honcho confirmed fans’ biggest fears, stating that Shepard tore his ACL on the play.

While he didn’t say as much, the injury ensures that the Giants and Daniel Jones will be without their number one wideout for the rest of the year.

I love this dude I feel for him he is effective when on the field, but poor dude never catches a break between leg injuries and concussions. Achilles and ACL back to back man is that unfortunate https://t.co/jzmpRJuFLI

Many joined Beckham in calling for MetLife to switch from turf to grass.

Previous studies show that playing on synthetic turf in the NFL resulted in a 16% increase in lower body injuries compared to the same injuries on natural grass. These results were from the 2012-2016 seasons, during which all injuries in the lower extremities (foot, knee and ankle). The study concluded synthetic turf does have an impact on injuries to lower body parts in NFL players.

Unfortunately, any potential change would come too late for Shepard’s sake.