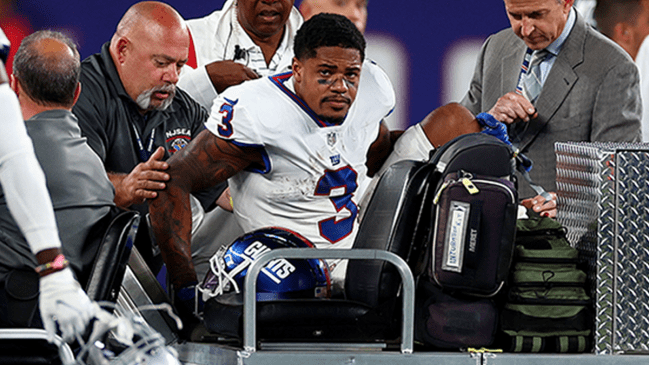 Odell Beckham Jr. kicked off the scoring in Super Bowl LVI with a touchdown that helped the Rams walk away with a 23-20 victory over the Bengals, but he saw his time playing in The Big Game cut short after he was sidelined due to the ACL tear he suffered during a non-contact play in the second quarter.

That injury was just the latest in a long line of incidents that have highlighted the downsides of playing on artificial turf; in 2020, NFLPA president JC Tretter called for the 16 NFL teams who currently use it to switch over to natural grass thanks to data that highlights the increased risk that comes with playing on a fake surface.

The Giants and the Jets have repeatedly found themselves at the center of controversy thanks to a steady stream of complaints from visiting teams that have taken issue with the turf at MetLife Stadium after seeing players succumb to similar injuries.

On Monday, the field at MetLife appeared to claim another victim after Giants wide receiver Sterling Shepard collapsed to the ground while running a seemingly routine route during New York’s final drive of the game.

While there’s no official diagnosis as of this writing, there are fears Shepard may have suffered a season-ending injury—and OBJ did not hold back after seeing yet another unfortunate mishap unfold at the stadium he once called home.

After the contest wrapped up, Beckham Jr.—who remains a free agent as he continues to rehabilitate the ACL injury—extended his condolences to his fellow wide receiver while calling attention to the many issues that could seemingly be solved by installing real grass in every stadium.

Just get rid of it all the fkngether bro. Billions made off this game I can’t understand why we can’t play on grass. That shxt is rough. Prayers up for my brother. Shxt just hurt my heart 🤕

While the cost of maintenance is undoubtedly a factor when it comes to the decision to use artificial turf, at some point, you have to wonder if you can really put a price on the increased amount of risk guys who are already playing one of the most dangerous games on the planet face whenever they step onto it.