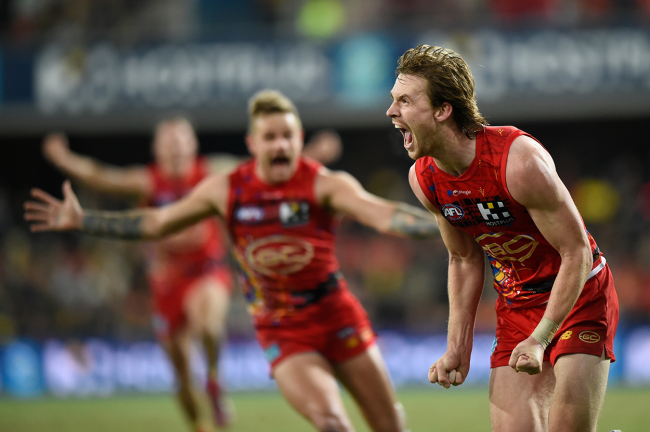 Saturday’s Aussie rules football match between the Richmond Football Club and the Gold Coast Suns was downright bananas. It ended in in bedlam and one young fan’s reaction to the incredible game-winning moment is what sports are all about.

It was all Richmond during the first half. After the two teams traded goals early, the visitors turned things up a notch and jumped out to a 40-point lead at halftime.

It looked as though Gold Coast was completely out of the match with no signs of life. But that quickly changed in a hurry.

The Suns kicked things into gear and kicked three-straight goals to cut the deficit in half. Down by 20, star midfielder Noah Anderson took over for the home team.

He “kicked a ripping goal” to keep his team in the game and got them within 15.

Noah Anderson kicks a ripping goal! The Suns will not go away 👊

From there, Richmond had an opportunity to close out the match and take a four-point win, but it left the door ajar for Gold Coast with time expired. It came down to one kick.

If Anderson scored the goal, the Suns would complete one of the greatest comebacks in the history of the sport. If he missed, they would fall heartbreakingly short in front of a home crowd.

Anderson hit it. He made the kick, gave Gold Coast the win and completed a come-from-behind win to keep its season alive. It was mayhem.

In the stands, one young fan soaked it all in. A video shows him standing alone as Anderson took the kick, unable to contain his emotions and stress. When it went in, he exploded with excitement.

The entire moment is incredible, take a look:

Just rewatched the video I took of my son watching @GoldCoastSUNS game winning goal after the siren. How good is footy. #AFLSunsTigers pic.twitter.com/RXzhSDOGtr

This right here is what sports are all about. It’s bigger than a game.