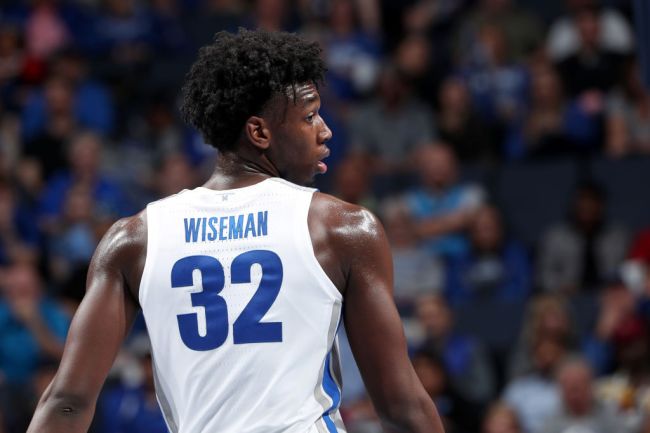 With the second pick in the 2020 NBA Draft, the Golden State Warriors selected James Wiseman on Wednesday.

The 7-foot-1, 240-pound center out of Memphis has great size and length that fits well on a team that is thin in that department. Considering his elite frame, his feet are surprisingly nimble, he is agile in his lateral defense, he jumps well and covers the court in only a few steps. He makes for an extremely promising big man on both sides of the ball and fits well on a Golden State roster that has never boasted a weapon in the post.

However, after signing with Memphis to fufill his one year of college before entering the NBA Draft, Wiseman (the nation’s top recruit in 2019) only played three games with the Tigers. The NCAA discovered that the team’s head coach, Penny Hardaway, had paid his star big man’s mother $11,500 to cover moving costs when he was Wiseman’s AAU coach. As a result, Wiseman was suspended for twelve games, chose to forgo his eligibility and instead signed with an agent in preparation for the draft. There are some questions about his experience, but there shouldn’t be.

Golden State drafts James Wiseman with the second pick in the 2020 #NBADraft.

The 7’1” center played AAU & college ball under Penny Hardaway in Memphis and his high school mixtape is not fair 🤧👑 pic.twitter.com/LaqUhyMNSV

As a southpaw, he is at his best near the rim and will be a valuable piece to a team that has a lot of big decisions to make as the free agency period this week. Wiseman will run the floor for easy baskets, given the speed and athleticism advantage he will face in most matchups, and could be a dynamic finisher with soft hands out of a pick and roll.

The Warriors missed out on the playoffs last season and finished 15-50 before COVID-19 forced the league to move to a bubble format. Prior to the season, Kevin Durant left in a sign-and-trade with the Brooklyn Nets and Andre Iguodala was traded to Memphis, breaking up the “Hamptons Five.” All-Star shooting guard Klay Thompson missed the entire regular season with a torn ACL and Stephen Curry played in just five games before undergoing season-ending surgery to repair a broken hand.

Curry and Thompson will be back to lead Golden State during the 2020/21 season and Draymond Green will round out the team’s big three. However, Thompson suffered an injury to his lower body this afternoon. Around them, an abundance of youth is slated to provide depth in the supporting cast. More than likely, half of head coach Steve Kerr’s roster will be 24 years old or younger, including its 19-year-old first round pick. Russell was traded for former No. 1 pick Andrew Wiggins at the trade deadline and Wiseman will step into the five-spot to create a pretty powerful starting lineup.