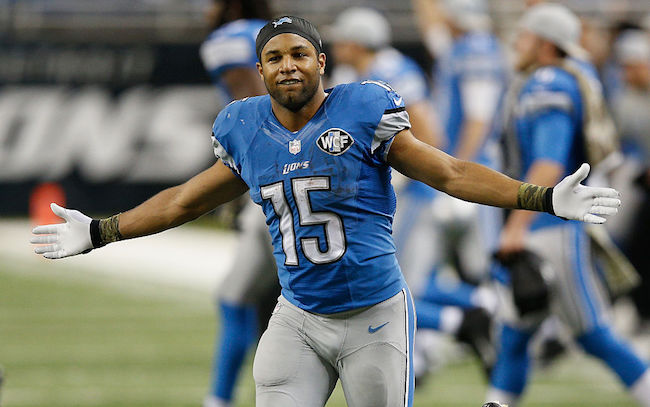 Golden Tate first made a name for himself at Notre Dame before being selected by Seattle in the second round of the NFL Draft, where he played for a few years prior to his departure to the Detroit Lions. During his time there so far, he’s gained a reputation as a solid wide receiver— after all, you have to have pretty good hands to average 1,000 receiving yards a year, and it appears those skills translate pretty well to certain situations off of the football field.

Over the weekend, Tate decided to take advantage of the offseason and head up north to British Columbia, because there’s no better place to travel to than Canada if you’re looking to go somewhere during the winter— unless you’re a fan of skiing. If that’s the case, then it’s probably one of the more ideal destinations, which is likely how Tate found himself in Whistler, the home of a giant ski resort.

If you’ve ever gone skiing (or seen Out Cold), then you’re probably more than aware the slopes are the perfect place to party. Tate proved that over the weekend when he decked himself out in an American flag ski suit that rivals the outfit Juelz Santana wore in the “Dipset Anthem” video and motioned for someone to throw him a beer. He proceeded to crack the can and chug it down like every good, red-blooded American is taught to.

Gotta protect @ShowtimeTate at all costs. The man is a National Treasure 🇺🇸🇺🇸🇺🇸 pic.twitter.com/pUkQnIgYMW

As far as I’m concerned, his fantasy stock just went way, way up.