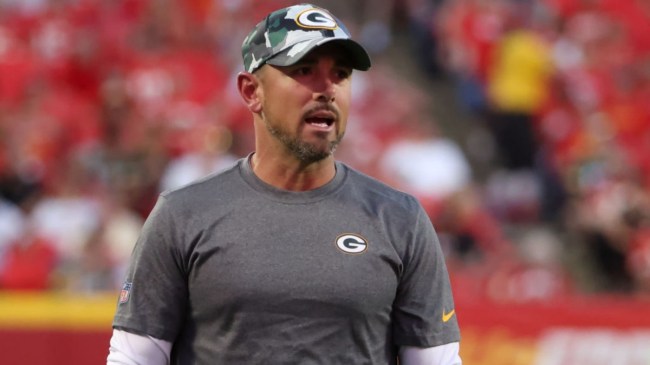 The Green Bay Packers underwent big changes at wide receiver this offseason. They traded away the league’s best wide receiver in Davante Adams in a blockbuster move and lost Marquez Valdes-Scantling and Equanimeous St. Brown to free agency.

To replace the missing players, the Packers signed Sammy Watkins and drafted Christian Watson and Romeo Doubs. It’s not exactly the most impressive group of replacements, but there was hope that one of them might stand out as a reliable option for Aaron Rodgers to throw to, especially with the reports that have been coming out on Doubs in camp.

However, it seems that hasn’t been the case. The Atheltic’s Matt Schneidman reported today that Matt LaFleur said there is no clear cut receiver in front of everybody else right now.

PSA from Matt LaFleur to stay away from Packers WRs in fantasy:

"I don't think anybody's clear cut in front of the other guy. I think it's gonna be very much the ball's gonna get spread around and we're gonna try to feature different guys in different spots."

I don’t think anybody’s clear cut in front of the other guy. I think it’s gonna be very much the ball’s gonna get spread around and we’re gonna try to feature different guys in different spots.

This will be a major change for the Packers and Aaron Rodgers who have had a clear number 1 target for years. If none of the team’s receivers have truly gained Rodgers’ trust, we could see the Packers turn into a more run-heavy team than they have been in the past.

The regular season hasn’t even begun yet, so the Packers receivers will all have more chances to establish themselves as the alpha receiver and Christian Watson has spent much of training camp injured, making it difficult for him to make a big impression.

However, this has to be a bit troubling for the Packers as they try to figure how to move forward without a top tier receiver to turn to in big moments.

Packers receivers have a lot to prove this season

The Packers receiving corps will feature 2 rookie receivers this season looking to get their careers off to strong starts, but it is the veterans who really have something to prove this season.

Sammy Watkins built up a ton of hype with a big first two years for the Bills, but has never gotten close to the numbers he posted in year 2 in the 6 seasons since.

Allen Lazard has spent 4 seasons with the Packers and was never able to truly establish himself as the team’s #2 behind Davante Adams.

Between the 2 and Randall Cobb, the Packers are looking at a group of veteran receivers that only combined for only 1282 yards. Davante Adams racked up 1553 yards by himself for the Packers last season.

The team’s veteran receivers will need to step up in a big way this season.