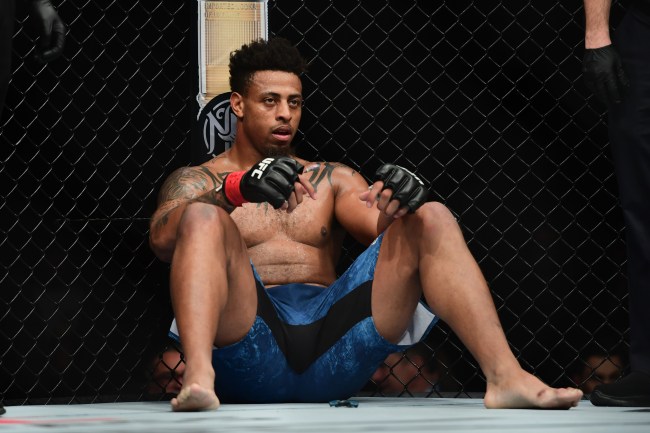 NEW YORK, NEW YORK - JANUARY 19: Greg Hardy waits as officials decide whether to disqualify him after an illegal move in heavyweights fight against Allen Crowder at UFC Fight Night at Barclays Center on January 19, 2019 in New York City. (Photo by Sarah Stier/Getty Images)

During tonight’s UFC Brooklyn event Hardy was DQed after he delivered an illegal knee to a downed opponent when he kneed Allen Crowder in the head while he still had a knee on the ground.

Greg Hardy, who has no business being in a UFC event, is disqualified for a very illegal knee pic.twitter.com/bBnpSh6qG3

Welp, Greg Hardy leaves the octagon to a course of boos after being DQ’d for an illegal strike in his UFC debut #UFCBrooklyn pic.twitter.com/G8PLUVkbiF

The Internet of course blasted Hardy, the UFC and ESPN after the fight.

So, not only does domestic abuser Greg Hardy get a tone-deaf spot in the co-main to pull in the ESPN crowd, but he completely screws himself in a lackluster performance in what was booked as a squash match & fans chant "asshole" at him after a blatant illegal blow. #UFCBrooklyn pic.twitter.com/1zsecQUg2W

the ufc just made Greg Hardy the story of the fight night… why was Hardy on this card??? Who was watching this card just because of Greg Hardy?