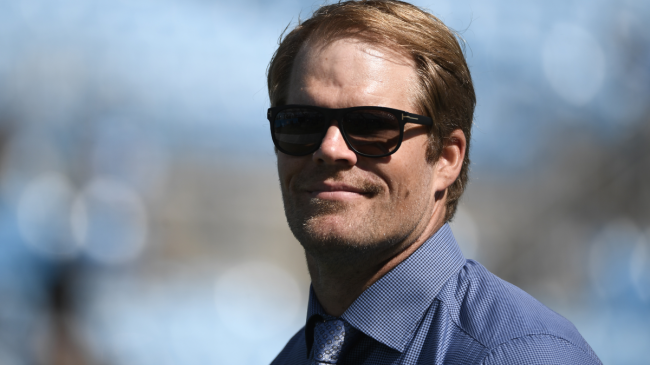 NFL analyst Greg Olsen sported an interesting look on Sunday’s FOX broadcast, and it has many reacting on social media. Olsen, who appeared to be balding a bit in his playing days, now dons a full head of hair.

On Sunday, his auburn hued comb over had the fans talking.

Some said the sportscaster looked a bit disheveled, noting a messy appearance that included a loose tie and scruffy shave, while others claimed he was wearing a hair piece. Either way, the response was not kind to the former NFL pass catcher.

After seeing Greg Olsen’s hair in his Sunday afternoon broadcast, many NFL fans hopped on social media to post their replies. Take a look at the immediate reaction online.

One fan said, “Does Greg Olsen know he’s on television? Maybe fix your tie and shave and comb your hair. Just saying,” in response to seeing the announcer’s scruffy look in the booth.

Does Greg Olsen know he’s on television? Maybe fix your tie and shave and comb your hair. Just sayin.

Another viewer wrote, “Greg Olsen’s hair has to be one of the greatest comeback stories in NFL history,” noting that his head of hair was non-existent during his playing days.

A few even went as far as to call the former NFL star out for wearing a hair piece. This fan commented, “What a hair piece on Greg Olsen, sheesh that’s bad,” while another wrote, “Greg Olsen’s hair plugs are terrible.”

What a hair piece on Greg Olsen sheesh that’s bad

Here are a few more responses from concerned fans on Twitter.

What is wrong with Greg Olsen’s hair?

Someone allowed Greg Olsen on HDTV with that hair. Unconscionable.

Olsen might want to clean things up before his next broadcast appearance.