Gregg Popovich Goes Off On Donald Trump: ‘He Creates A Situation And Runs Away Like A Grade-Schooler’ 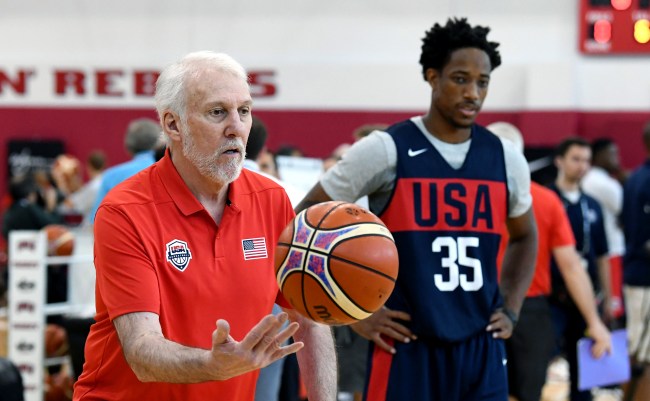 San Antonio Spurs Gregg Popovich has apparently had enough of what he sees as President Donald Trump’s lack of leadership, both during the global pandemic as well as in the face of the current civil unrest and protests.

“It’s unbelievable,” Popovich told Dave Zirin of The Nation. “If Trump had a brain, even if it was 99 percent cynical, he would come out and say something to unify people. But he doesn’t care about bringing people together. Even now. That’s how deranged he is. It’s all about him. It’s all about what benefits him personally. It’s never about the greater good. And that’s all he’s ever been.

“It’s so clear what needs to be done. We need a president to come out and say simply that ‘black lives matter.’ Just say those three words. But he won’t and he can’t. He can’t because it’s more important to him to mollify the small group of followers who validate his insanity. But it’s more than just Trump. The system has to change. I’ll do whatever I can do to help, because that’s what leaders do. But he can’t do anything to put us on a positive path, because he’s not a leader.

“It’s like what Lindsay Graham and Ted Cruz used to say when they had the courage to say it: He’s unfit.

Popovich, 71, who graduated in 1970 from the United States Air Force Academy and served five years before becoming an assistant basketball coach there, wasn’t done.

“He’s not just divisive,” he continued. “He’s a destroyer. To be in his presence makes you die. He will eat you alive for his own purposes. I’m appalled that we have a leader who can’t say ‘black lives matter.’ That’s why he hides in the White House basement. He is a coward. He creates a situation and runs away like a grade-schooler. Actually, I think it’s best to ignore him. There is nothing he can do to make this better because of who he is: a deranged idiot.”

To say Pop is a little heated right about now would be a tremendous understatement.

At least he can solace in the fact that NBA commissioner Adam Silver is with him on the need for change.

“This moment also requires greater introspection from those of us, including me, who may never know the full pain and fear many of our colleagues and players experience every day,” Silver wrote in a memo to all 30 NBA teams. “We have to reach out, listen to each other and work together to be part of the solution. And as an organization, we need to do everything in our power to make a meaningful difference. Even in this sad and difficult time, I know we can.”

That was followed up by the NBA Coaches Association forming a committee to address racial injustice and reform with Popovich, Steve Kerr, Lloyd Pierce, David Fizdale and Stan Van Gundy all selected to participate.

Thank you @PabloTorre for the perfect text. In 2017 Trump called kneeling NFL players who peacefully protested police brutality ‘sons of bitches.’ Last night he called Minneapolis protesters ‘thugs.’ This is why racists shouldn’t be allowed to be president. https://t.co/klcg8TeCDK

“As NBA coaches — both head and assistant coaches — we lead groups of men, most of whom are African American, and we see, hear and share their feelings of disgust, frustration, helplessness and anger,” read a statement from the NBNCA. “The events of the past few weeks — police brutality, racial profiling and the weaponization of racism — are shameful, inhumane and intolerable.

“Witnessing the murder of George Floyd in cold blood and in broad daylight has traumatized our nation, but the reality is that African Americans are targeted and victimized on a daily basis. As NBA coaches, we cannot treat this as an isolated incident of outrage.

“We are committed to working in our NBA cities with local leaders, officials and law enforcement agencies to create positive change in our communities. We have the power and platform to affect change, and we will use it.”

It's almost like the United States has no President – we are a rudderless ship heading for a major disaster. Good luck everyone!