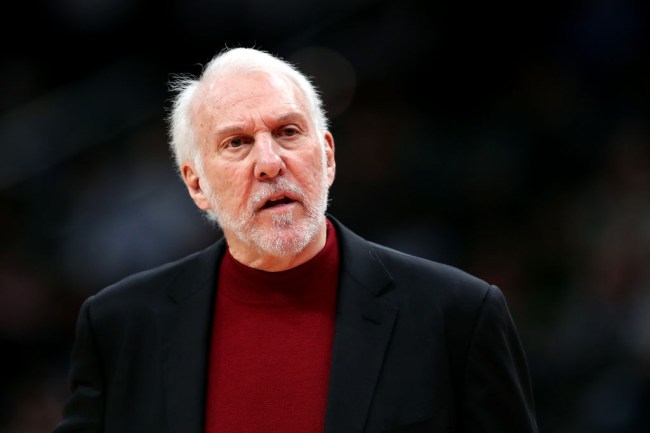 For those on the outside looking in, he’s hilarious, but for those actually having to stand in a scrum with him and fire off questions, I’m sure most people in said scrum dread those few minutes. Nevertheless, Popovich is a one-of-a-kind guy and one of the most well-known personalities in the NBA.

We got a perfect taste of Popovich being Popovich on Tuesday night following the Spurs’ 129-102 loss to the Lakers.

LeBron James put together quite the night against San Antonio scoring 36 points, to go along with nine assists and seven rebounds. Eighteen of those 36 points came from behind the arc as James made six threes on the night with five of those coming in the fourth quarter.

James put on a show and helped lead the Lakers to a 42-point fourth quarter. Popovich was simply asked what is there to do when James takes over games like he did on Tuesday night and his answer was priceless.

“Make sure you get good pictures? We try to prevent it. If we could prevent it, we would have. Jesus.”

Spurs’ Gregg Popovich on what to do when Lakers’ LeBron James takes over: “Make sure you get good pictures? We try prevent it. If we could prevent it, we would have. Jesus. Do you stay up all night to think of questions like that? Anybody else got a question that makes sense?” pic.twitter.com/3JyFD8Jlyc

Maybe the best moment of the video is the reporter saying ‘I just thought of that question’ and Pop hit him back with the wide-eyed ‘that’s a good one.’

He may come off as an asshole to some, but Popovich is always straight-up honest with the media. The question of ‘how do you stop LeBron James’ is a question that’s been asked for years now and it’s pretty clear there’s no real way to slow him down, which is what Pop said, just not in those words.