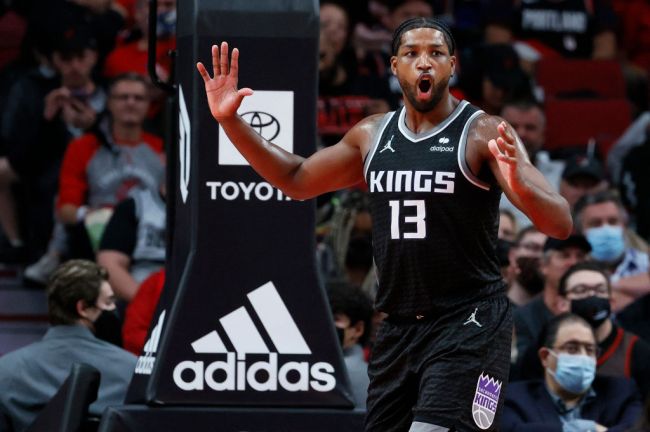 Kings center Tristan Thompson was apparently not pleased when a Grizzlies fan brought up the Kardashian family while talking trash to him.

On Sunday night, Thompson had Grizzlies security remove a fan sitting courtside who was heckling him during the game.

Game officials, Grizzlies personnel, and NBA security stopped play to have the fan removed after Kings guard Tyrese Haliburton shot two free throws with 9:38 to play in the fourth quarter. Thompson was seen looking in the fan’s direction and motioning to officials before security escorted him out of the building. The fan raised his glass and gestured to the crowd as he left the arena.

According to Memphis Grizzlies beat writer Drew Hill, the fan was ejected from the game after making comments about the Kardashian family while heckling Thompson, who has been a long-term on-again-off-again relationship with Khloe Kardashian.

Per multiple people around the fan that was thrown out of the Grizzlies game tonight, he was tossed because he was making comments about the Kardashian family in the direction of Tristan Thompson.

Kings interim head coach Alvin Gentry commented on the matter after the game.

“I think (when) you pay for a ticket you’ve got a right to boo guys, you’ve got a right to cheer for your team … but inappropriate things should never be what anyone should say,” Gentry declined to offer specifics when asked what the fan said. “I don’t think it needs to be talked about or anything, but obviously it’s not anything that I’m going to tolerate people saying to my players, I know that, not without intervening and asking them to be removed, “They can say anything they want to me or they can boo and do everything they want with the players, but there’s no room for saying inappropriate things in a sporting event. That’s not why you’re there.”

Thompson’s incident with a fan comes days after his former teammate LeBron James had two Pacers fans removed from a game for making “obscene gestures and words” directed at him.