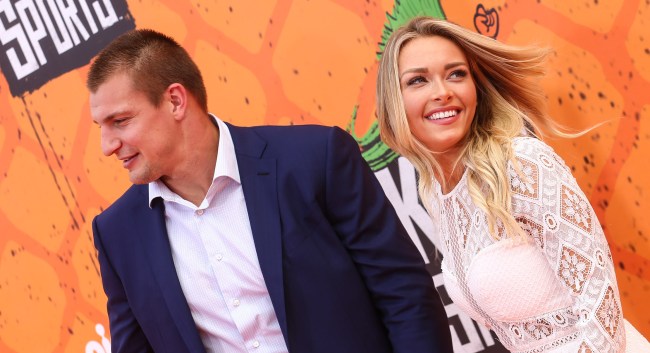 The 2019 Summer of Gronk has officially kicked off. 2018’s Summer of Gronk was pretty great, but we’re looking for a little more out of the future Hall of Famer now that he’s got another Super Bowl ring and a new girlfriend this year.

Gronk’s off to a good start, as he and Camille Kostek are down in Cabo with the Deckers, Eric and Jessie James, enjoying some quality time on a boat.

And by quality time on a boat, I, of course, mean Camille is doing some twerking in a bikini while Gronk grabs at her ass.

And people wonder why would Gronk would be thinking about retiring from getting the crap beaten out of him every Sunday for half the year.

Gronk and co. also hit the beach for a little volleyball, spikeball, and, ummm, doing headstands.

The latest scuttlebutt surrounding the Patriots, other than Bob Kraft’s sexual escapades, involve whether or not New England is looking to draft Rob Gronkowski’s successor, perhaps with one of Iowa’s two stud tight ends that are entering this year’s draft.

[T.J.] Hockenson and [Noah] Fant both had meetings with the Patriots during combine week. New England currently owns the final pick of the first round (No. 32) and might need to trade up to draft either, as some mock drafts have Hockenson going as high as No. 8.

The Patriots also sat down with several other top-level tight end prospects, including Alabama’s Irv Smith Jr., whom many consider this year’s third-best option. Smith, the son of a former NFL tight end, said he’d be excited to play in New England.

All three of those options sound pretty good. But will they keep us entertained the way Gronk does?