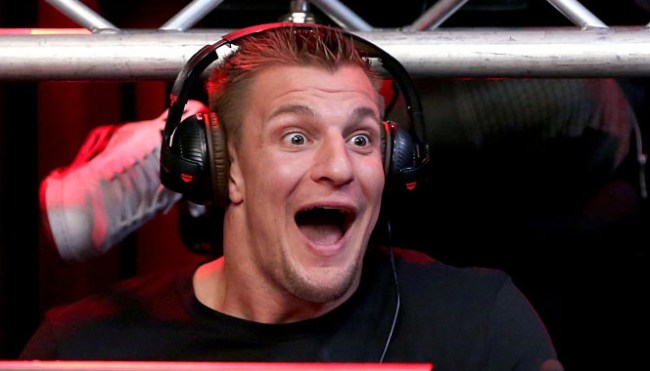 And The Summer of Gronk rolls on… The Gronkowski Tour of Fun made a couple more stops over the weekend. The first was at his old high school to mess around playing some field hockey. Then the Patriots tight end stopped by a little league field in Buffalo for a little batting practice. Totally normal stuff… for Gronk.

I believe this caption by WMUR TV says it all.

“Picture this: You’re practicing your field hockey shot when all of a sudden, @RobGronkowski runs onto the field! That’s what happened to ​Assumption College sophomore @ShannonQuinlann!”

Picture this: You’re practicing your field hockey shot when all of a sudden, @RobGronkowski runs onto the field! That’s what happened to ​Assumption College sophomore @ShannonQuinlann! https://t.co/jrabxiOUmp

Gronk with an aerial hit pic.twitter.com/GqyMRJcrKG

So, we can now add field hockey to Gronk’s summer of not training for the 2018 NFL season to chilling on the beach with his girlfriend Camille Kostek, crashing a bachelor party disguised as a leprechaun on St. Patrick’s Day, saying he’s coming back to play for the “69ers,” taking off his shirt and had a dance-off with Shaq, buying a stake in a Ketucky Derby horse that is named for him, working on his “dirt-biking skills” rather than attend Patriots’ offseason workouts, and having a ball blasting a minigun in preparation for an upcoming role in a action movie.

Oh yeah, the batting practice at a little league park in Buffalo. How could I almost forget that?

Seriously, at this point I don’t why this guy DOESN’T retire.

At this point, it’s not clear if #Patriots TE Rob Gronkowski will show for OTAs, as his contract is still an issue. But one source said the expectation is that Tom Brady and Gronk will be there for minicamp in June when it’s mandatory.

UPDATE: We have it on good authority that Gronk was actually was “busting his ass running routes catching balls” before he decided to try his hand at field hockey. So, good job, Gronk!