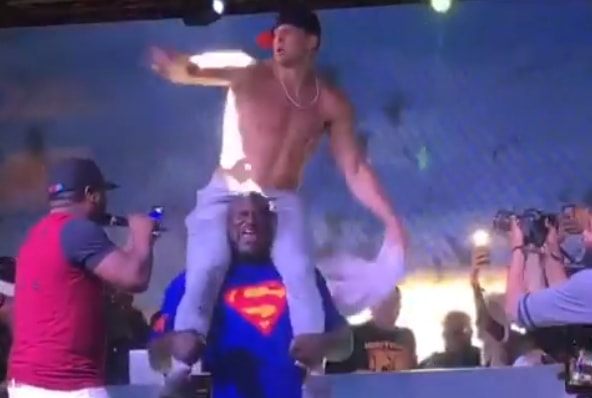 You may want to clear the room of the children before watching this electrifying dance-off between Rob Gronkowski and Shaquille O’Neal. Both of the iconic sports stars were partying at Miami Music Week, then out of nowhere Gronk and Shaq collided in an epic dance battle that won’t soon be forgotten. Gronk challenged Shaq to a dance battle because Gronk.

Shaq telling Gronk to stop dancing so he doesn’t get anyone pregnant is the funniest thing you’ll see this morning probably till @realDonaldTrump tweets something stupid pic.twitter.com/MzhjoHCqr2

A shirtless Gronk and O’Neal kicked off Ultra Weekend with authority and uncoordinated body convulsions at Shaq’s “Fun House” party. You’ve never seen anything like the 7’1″ exchanging dance moves with the 6’6″ Gronk.

Shaq vs @gronk dance battle you tell me who won

What the hell did I just watch?

At one point, Shaq puts the 265-pound Gronk on his shoulders.

Gronk counters by putting his head through Shaq’s legs. Shaq attempted to keep Mr. Gronkowski somewhat in-line by warning him, “Gronk, you’re gonna get somebody pregnant. Cut that sh*t out.”

Guests at the party included A-Trak, Von Miller, and Diplo. Also, here’s a photo of DJ Steve Aoki and Shaq. We think.

Everyone needs a hug including this big guy @shaq pic.twitter.com/DUI6gc2PMo

Never a dull moment with Gronk in the building.