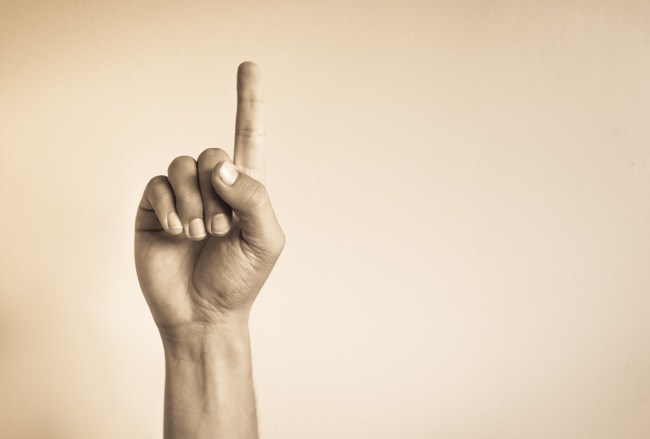 If you’ve ever had the misfortune of attempting two-finger push-ups then you already know they’re one of the most miserable exercises on the planet. In fact, it feels like a misnomer to even call two-finger push-ups an ‘exercise’ because it’s nothing short of torture.

Nevertheless, there are some absolute madmen on this planet who thrive on the pain. They need it to feel alive. But instead of finding their outlet in pain from autoerotic asphyxiation like David Carradine (R.I.P.) they torture themselves with these two-fingered push-ups and take it to the max by setting records.

Armenian Hrachik Kostandyan is the current Guinness World Record holder for ‘most two-finger push-ups in 60 seconds’ with an almost unfathomable 57 in 1 minute.

He’s busting out nearly one 2-finger push-up every second for a full minute while most people’s digits would snap like twigs if they attempted a single one of these painful ‘shups. He set this Guinness World Record earlier this Summer but the painful footage of him busting out these push-ups just hit YouTube.

I’d personally like to know how many breaths he took during those 60 seconds, and what his heart rate looked like. Without steady breathing and getting oxygen to your muscles you’d surely never make it the full minute without giving up but for a 2-finger push-up I imagine you want to keep your entire core and body as tense as possible so it’d be nearly impossible to relax.

I’ve recently been tossing around the idea with my BroBible colleagues of setting/breaking a handful of Guinness World Records. I’m willing to put my body and sanity on the line in pursuit of being immortalized in those glorious pages of the Guinness World Records Book I’m just not sure where to start outside of the competitive eating section…

Anyway, shout out to Armenia’s Hrachik Kostandyan for being a complete beast and busting out 57 of these in 60 seconds.