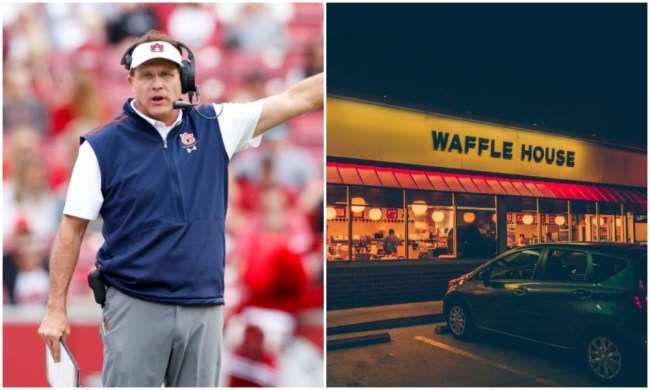 The pandemic has impacted everyone’s lives in some form or another. Everyone has had to make some sort of adjustment. For Auburn head football coach Gus Malzahn, one of the changes he’s had to make is staying out of a local Waffle House. That may not seem like a big deal (because it’s not) but for him and his wife Kristi, it sort of is.

The couple has been going to Waffle House after games on Saturdays for almost 25 years. The tradition started back when Malzahn was coaching at Shiloh Christian, but it became a well-known story back in 2013 after the two were spotted at the restaurant following Auburn’s dramatic win in the Iron Bowl.

To put it simply, going to Waffle House for pretty much any celebration is Malzahn’s thing, and now he doesn’t have that thing and he’s upset about it. The Malzahn’s aren’t visiting their favorite establishment as an abundance of caution.

Malzahn not going to Waffle House is such a big deal, AL.com decided to write a gigantic piece about the tradition.

“I’ll tell you what, I’m real disappointed I can’t go to my Waffle House after the game,” Malzahn said. “So, it’s a weird year, like we’ve talked about, in a lot of different ways.”

If you’ve been to Waffle House more than a few times, you usually have a go-to order. Seeing as how it sounds like the Malzahn’s have been there every Saturday since the dawn of time they know exactly what they want when they sit down.

According to AL.com, Gus always orders a ham and cheese omelet with hashbrowns scattered (crispy), smothered (with sauteed onions), covered (with melted cheese) and chunked (topped with hickory-smoked ham), and a side of bacon. After big wins, he’ll add a waffle to sweeten the deal — though he’ll usually only finish half of it. Kristi’s go-to order is the two-egg breakfast with extra-crispy bacon and raisin toast.

You have to give it up for Kristi as she described what Waffle House is in the most perfect way possible:

“It’s kind of an everyman’s place,” Kristi said. “You know, everybody’s always welcome at Waffle House. You can walk in in your dressiest of dresses that you’d see during prom season and formal season; you see people in there in their prom and formal looks, but you also see those that are down on their luck and those that have had a little too much fun and those that have been trying to drown some sorrows maybe. It’s a little bit of everything.”

Waffle House is the ultimate everyman’s place and a great spot to celebrate big-time events. I mean, have you ever had a waffle from Waffle House? It’s the greatest breakfast item in America.

Great to celebrate a win with @kristi_malzahn at our postgame hangout!