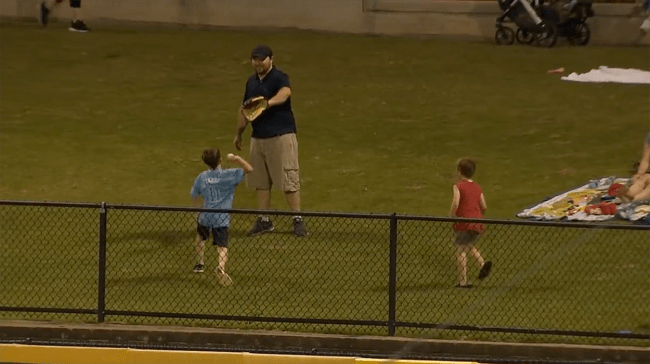 This is one of those things that wouldn’t be funny if the person involved wasn’t okay. But he was okay, so it’s hilarious.

On Thursday evening, the Gwinnett Stripers hosted the Louisville Bats for the second game of a five-game series. The Triple-A affiliate for the Atlanta Braves is one of the top teams in the Western division, but their fans could use some help with their fielding.

As the two teams battled it out on the diamond, a very different scene unfolded in right field. A local family went out to the ballpark and set up a nice little blanket to hang out and enjoy a night out.

At some point, the father and his two sons got up to play some catch. While tossing the ball to himself, the dad accidentally missed his glove and fumbled the ball to the grass below.

Not to worry, his kids were all over it. The two sons ran over to snag the ball and the bigger (likely older) of the two won out on the fielding effort.

His throw back did not go as well. He turned around, took a few steps toward his father and proceeded to launch the ball directly at his head. It was a laser and it nailed him right in the face, take a look:

Fortunately, the ball did not appear to be a real baseball, which would have hurt. It bounced right off of the dad’s face, and although he might have a swollen lip this morning, he appeared to be okay.

At the very least, if there is a positive to takeaway from the incident, the father can take pride in knowing that his son has a cannon.