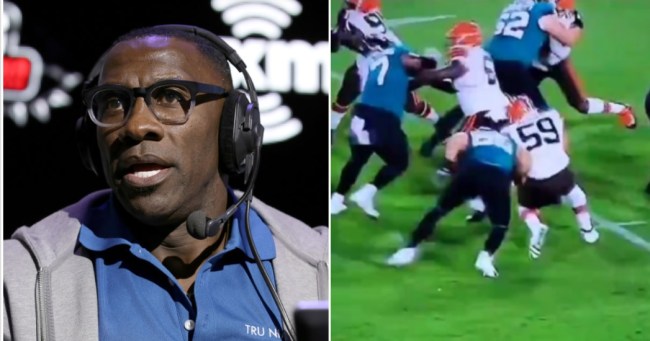 Hall of Fame tight end Shannon Sharpe has seen the viral Tim Tebow block video from the Jaguars preseason game and he has some thoughts about it.

On Saturday night, Tebow was mocked by the Internet after he attempted to make a block while in the red zone.

Sharpe, who is considered one of the greatest tight ends of all-time, chimed in on Twitter on what he thought about Tebow’s block.

No position is easy in the NFL especially IF* you’ve never played it b4. Blocking is all about angles and leverage, IF* I can do it weighing btw 215- 228. He definitely should be able to at 250, gotta get his mind right tho. Watch the tape and get better https://t.co/KDS9bV62cG

IF* his job was to seal, he used the wrong shoulder. Right shoulder to kick out, left shoulder to seal. It’s just going to take time for Tim to learn the nuances of playing the position. https://t.co/KDS9bV62cG

That thinking gets you, but ok. https://t.co/VTxlSHeXpX

Sharpe proceeded to answer questions from fans about what he thought about Tebow’s transition to tight end at this stage of his career.

I believe he could’ve transitioned to T.E IF* he had moved once he got with the jets. It’s a mindset not sure he’s built like that at his age. https://t.co/Ean6S03JLx

I wasn’t Gronk of Kittles at blocking but I weighed less than T.O and Julio and played 14yrs at T.E. It’s a mindset, you were not going to whip my A** all day, regardless of who you were. https://t.co/ArG5HMNhBy

It’s harder than ppl think. He’s been protecting that shoulder since he was 10 https://t.co/6E3TQORBbS

Blocking for someone and running with the football are 2 entirely different things. https://t.co/H3YNBJ5giA

Sharpe doesn’t sound too optimistic about Tebow’s chances of making the Jaguars roster as an NFL tight end.