Hank Haney Instantly Finds Something To Complain About Regarding Tiger vs. Phil Match, Wrongly Points Finger At PGA Tour 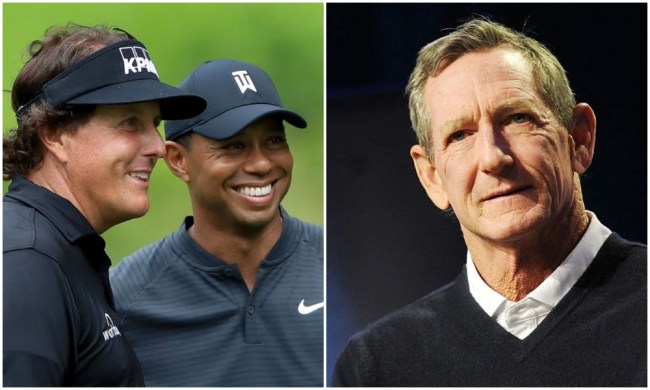 On Wednesday it was announced that Tiger Woods and Phil Mickelson will be going head-to-head in what will be the second edition of ‘The Match’ with Tom Brady and Peyton Manning joining in on the fun this time around. It was also reported that all proceeds from the event will be going to a relief fund.

Less than 24 hours later, Hank Haney, Woods’ old swing coach, found something about the match to complain about.

The Action Network’s initial report explained that Mickelson and Woods would both have to “receive a release form for them to play a televised or streamed event in the U.S” and that the Tour is “still in discussions on a number of items, including ensuring the health and safety for all involved with the event.”

Haney focused in on that part of the report and ran with it taking major digs at the PGA Tour for ‘not yet approving’ the match. He also pointed out the fact that the event is going to take place in Florida, where the PGA Tour headquarters are located, and that it is involving “your two biggest players” calling it “ridiculous” that the Tour hasn’t signed off on this thing yet.

Haney is no stranger to making some rather bold claims on radio and his podcast, but his whole rant here is the definition of reaching.

The Match, Part II, hear my thoughts on it by listening to today's Hank Haney Podcast –

He initially complains about the Tour not already approving it, then argues his own point saying the Tour has no choice to approve it and suggests that it eventually will be approved. Are you keeping up here?

Haney is mad the tour hasn’t greenlit the event a month out but knows it eventually will be. I know the sports and golf news world is slow right now, but what’s the point?

Would the initial report perhaps look better if the PGA Tour wasn’t even mentioned suggesting that the match is a go? Sure, I’ll give Haney that one, but let’s not forget the situation here.

As Haney said, Woods and Mickelson are the “two biggest players” on Tour. Those two are going to team up with two of the greatest quarterbacks of all-time for a golf match in May as the entire sports world is on pause and many golf courses around the country are closed due to The Big Cancel.

Again, yes, this event is going to happen and the Tour will sign off on it, but what’s the problem with the Tour wanting to protect two of its biggest stars with so many uncertainties still out there involved with the virus? The Tour has to cover its bases from a worst-case scenario perspective first, then move on from there.

Even if the match raises millions upon millions of dollars for charity, if Woods, Mickelson, Brady, Manning, or one single person involved with the event was to actually get sick the first finger will be pointed at the Tour.

I’ll give Haney the benefit of the doubt and assume he understands that, and if he does, his shots at the Tour don’t make any sense whatsoever.