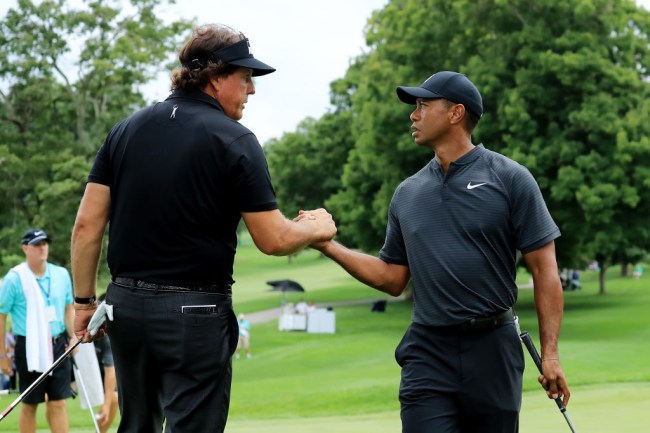 We’re going to get a second edition of ‘The Match’ according to reports and this time around there is going to be a major twist.

According to The Action Network, Tiger Woods and Phil Mickelson are in the final stages of planning another showdown to take place in May and two guys by the name of Tom Brady and Peyton Manning will be joining them for a 2 v 2 match. There have been multiple reports claiming this event was in the works, but it being in the ‘final stages’ is of significance.

Woods is expected to play with Manning while Mickelson will be Brady’s teammate.

A PGA TOUR official told The Action Network’s Jason Sobel that Tiger and Phil would to receive a “release form for them to play a televised or streamed event in the U.S.” TOUR officials did not immediately confirm that such a release has been granted.

The match is expected to be aired live on TNT and through BR Live. The first match between Woods and Mickelson took place in 2018 and was pay-per-view through BR Live. The rumored dates for the event are May 15 and May 24 and all proceeds from the match will go to multiple charities.

As for the course, nothing has been finalized, but the report suggests Woods’ home course, Medalist in Hobe Sound, FL, is a likely destination.

No other specific details have been reported just yet as far as format goes, but if they don’t elect to play at least some type of alternate shot for a portion of this, what are we really doing?