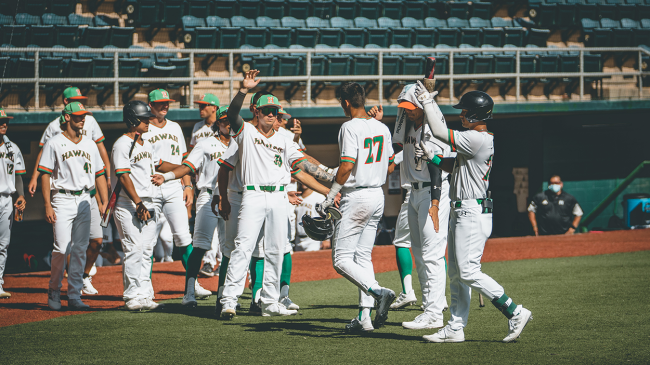 Although the University of Hawaii at Manoa has not seen much success on the baseball diamond this spring, there is a lot of season left. Whether the Rainbow Warriors can turn it around or not, they are doing an amazing job of growing the game and look sweet while doing it.

This year, with the MLB having been in a lockout, college baseball has had its moment in the sun without a professional counterpart. The amateur version of the game, though not always as technically or physically skilled, is way more fun.

Hawaii baseball is the perfect example.

For starters, their uniforms are amongst the best in the country.

Season tickets are on sale now! Don't miss any of the Washington State or Vanderbilt series! Plus all the big-time Big West matchups! #GoBows

Beyond their on-field ‘fits, the Bows are showing off of the drip in pregame. Much like on the professional level, the Aloha State sluggers break out their best outfits on their way to the stadium.

Some of the looks are fancier than others, but they all bring that island swag.

Ready for a rowdy night at the Les! #GoBows pic.twitter.com/nAWvac8QWN

Of the Bows, Scotty Scott has the perfect baseball name and he just looks like a ballplayer. He is hitting .300 on the season and plays a crucial role in the lineup, but his energy may be most valuable.

He recently showed off Hawaii’s newest purchase and it only makes Bows baseball that much cooler. With his bleached blonde mullet coming from his hat, flip flops on his feet, Scott threw up the shaka with one hand and held the team’s new custom boombox in the other.

Texas also has a boombox but it doesn’t come close to Hawaii’s.

It is unclear as to what Hawaii plans to do with the bumpboxx boombox, but it is clear that it is the coolest boombox in the country.