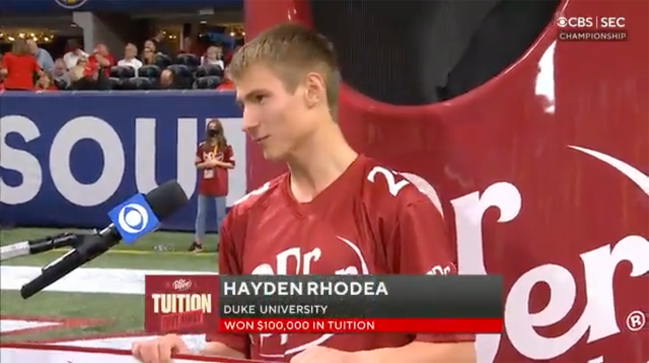 Hayden Rhodea is a freshman at Duke University who will not have to pay tuition for the rest of his four years. Rhodea, who bears a striking resemblance to Kirk Cousins, won the Dr. Pepper Tuition Giveaway during the SEC Championship Game on Saturday and is $100,000 richer.

Rhodea was dialed in from the start and his goal was simple. To win the Dr. Pepper Tuition Giveaway, a competitor must throw more footballs through an opening from five yards away than his opponent.

The competition was extremely close and very high scoring. Rhodea, who took the two-handed chest pass approach, beat his opponent Rachel, who used the one-handed push method, by three.

After the win, people began to notice that Rhodea looks a lot like a young Cousins. Apparently, his accuracy is also similar to that of the NFL quarterback.

you can’t fool me, this is Kirk Cousins pretending to be a college student to make an extra $100k on the side. we can’t let this stand https://t.co/8w8rs1Npn5

Rhodea’s win was no fluke, however. The young Blue Devil put in the work and it paid off. In his post-competition interview, he shared that he had been practicing at least two hours a day for the last three weeks.

I am unfamiliar with the standard training regimen of a Dr. Pepper Tuition Giveaway competitor, but I would imagine that very few are putting in the time that Rhodea did. He understood the task in front of him and did what he had to do to get it done.

Rachel, who lost, went home with $20,000. However, for Rhodea to go in there and miss less than five tosses is impressive. That is virtually unbeatable.