Tennessee, Michigan Fans Are Livid With Heisman Voters After Seeing The Four Finalists 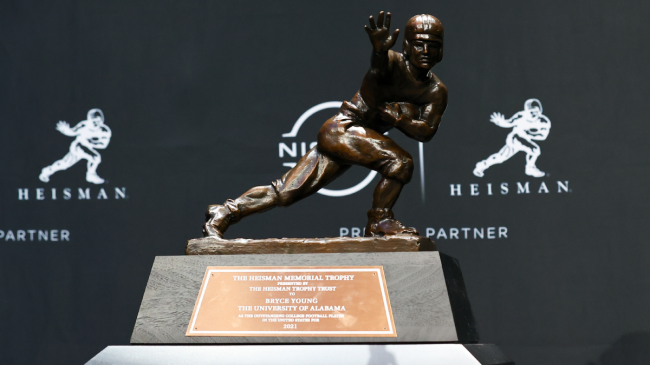 College football fans are not happy with the list of finalists for this year’s Heisman trophy. More specifically, supporters of the Michigan Wolverines and Tennessee Volunteers are livid after seeing the candidates.

The final four consists of USC QB Caleb Williams, TCU QB Max Duggan, Ohio State QB CJ Stroud, and Georgia QB Stetson Bennett. Many believe that Tennessee’s Hendon Hooker and Michigan’s Blake Corum were more deserving than Bennett. They claim that voters only added the Bulldog passer due to the fact that he’s on the No. 1 team.

And there’s certainly a legitimate argument.

Hooker led Tennessee to its best season in years, taking down Alabama and LSU on the way to 10 wins. He threw for more than 3,000 yards and totaled 32 touchdowns compared to only two interceptions. Hooker completely changed the trajectory of the program and exceeded expectations in Knoxville. Unfortunately, he suffered a season-ending knee injury in the Vols’ worst loss of the year.

Hooker also led the nation in QB rating, and when looking at the statistics with an unbiased eye, the Tennessee signal caller compares favorably despite playing two fewer games. There’s also the fact that Bennett plays on the most talented team, both offensively and defensively, in the country.

Many argue that if the two players switched teams, Georgia would still be in the playoff picture while Tennessee wouldn’t be nearly as successful.

Put Stetson Bennett on Tennessee and they don’t make a bowl.

Maybe more mind boggling, Bennett wasn’t a first- or second-team conference performer, yet he leaped both Hendon Hooker and last year’s Heisman winner Bryce Young according to the voters. Hooker, meanwhile, was the SEC’s Offensive Player of the Year.

Love the kid. Inspirational story. But his QB rating was more than 20 points lower than Hendon Hooker's.

Even in an all-time tough year for Heisman voting, him being a finalist is yikes.

As for Corum, he likely never stood a chance due to the position he plays. The Heisman has turned into a quarterback award, and despite being the best player on the only undefeated team in the Big Ten, he was at an immediate disadvantage.

There hasn’t been a running back to take home the Heisman since 2015 (Derrick Henry), and there’s been just one over the last 12 years. That will move to 13 with this year’s all-QB field.

Corum, similar to Hooker, suffered a late injury that kept him from showcasing his abilities in his team’s two most important matchups. Despite rushing for nearly 1,500 yards in 12 games, that certainly had an effect on the opinion of the voters.

Michigan RB Blake Corum did more than enough to warrant an invitation to New York as a Heisman finalist. He was snubbed.

A number of other fans commented with similar responses on social media.

One person wrote, “Stetson Bennett gets a trip to New York over Blake Corum and Hendon hooker because he’s the QB around 40 NFL players.”

Another posted, “Isn’t it supposed to be the 4 best players in college football invited to the Heisman Trophy Presentation? Stetson Bennett isn’t one the top 4 players on his own team. Yes, he’s a winner, but so is everyone else on GA’s roster.”

While fans will continue to debate, it’s all a moot point. USC’s Caleb Williams has all but locked up the award following an incredible finish to the season. He should win in a landslide when the trophy is awarded.