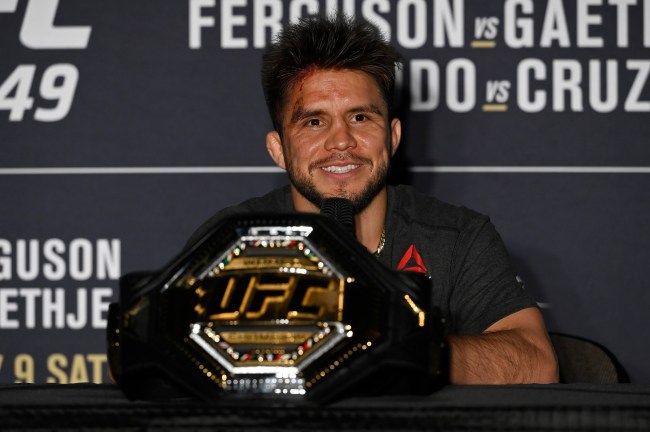 Just two days after the UFC announced a pair of big title fights for UFC 272, they got some bad news. Max Holloway was forced out of his trilogy fight with Alexander Volkanovski, leaving the UFC looking for a replacement.

There have been a couple of names thrown around to replace Holloway. The Korean Zombie, Chan Sung Jung, is supposedly the UFC’s pick while fans and media think Giga Chikadze should get the shot with a win over Calvin Kattar next weekend. However, another more intriguing option has thrown his hat in the ring.

If this fight were to actually happen it would be a major development for the UFC. We haven’t seen the former gold medalist, Henry Cejudo, in a fight since May of 2020.

In that fight, he made his first defense of the UFC Bantamweight title, a belt he originally won while also holding the Flyweight belt. When he won the bantamweight belt, Cejudo became just the 4th fighter in UFC history to simultaneously hold two titles.

Only Conor McGregor, Amanda Nunes, and Daniel Cormier have also achieved the feat. If Cejudo comes back and challenges Alexander Volkanovski for the Featherweight belt, he would become the first fighter in UFC history to challenge for belts in 3 different divisions.

If he wins, it would be very difficult to keep him out of the GOAT conversation. There aren’t many options in the Featherweight division that will create much fan interest, but Henry Cejudo chasing history could be just what the UFC needs to sell $75 pay-per-views.