Here’s Your Big, Fat Primer for UFC 259: Blachowicz vs. Adesanya 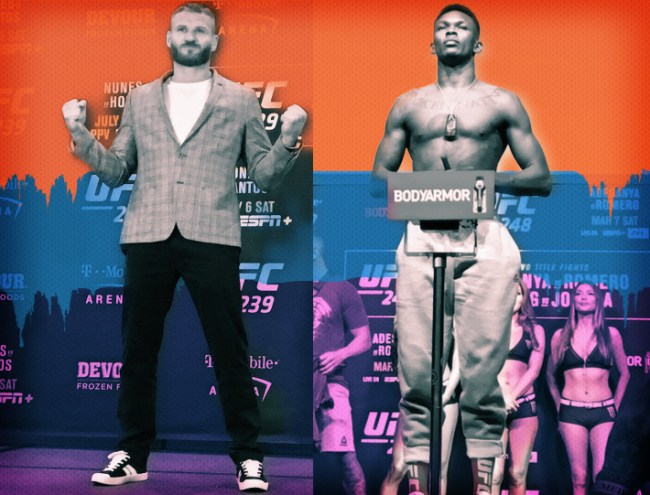 Absolute whopper of a UFC card this weekend. Make that a triple whopper with cheese, actually.

Just three weeks removed from its last Pay Per View event, the UFC is back on ESPN+ PPV with their latest offering, UFC 259 (March 6, 7 p.m. PST / 10 p.m. EST) , which is one of those stacked events that happens once, maybe twice, a year.

In this case, the fight card lives up to its billing, with three title fights atop the marquee, including a light heavyweight super fight between incumbent champion Jan Blachowicz and middleweight king Israel “Stylebender” Adesanya, who is moving up to 205 pounds in an effort to become the fifth fighter in UFC history to claim two belts at once. It’s one hell of a main event.

Just before Blachowicz and Adesanya take the Octagon, however, women’s MMA GOAT Amanda Nunes looks to defend her featherweight title for the second time, taking on Australia’s Megan Anderson. And, if that’s not enough, bantamweight champ Petr Yan will attempt the first defense of the belt he won on Fight Island, taking on number-one contender Aljamain Sterling. That’s definitely one you don’t want to miss.

The depth of UFC 259 goes beyond the three title fights. With 15 total bouts on the card (that’s including the prelims, which also air on ESPN+), UFC 259 is the most stacked card of 2021 thus far, and the deepest card since UFC 251 last July. So, prepare to make an evening out of this event, and while you’re at it, keep reading to learn a bit more about the fighters competing on the UFC 259 card.

What is Adesanya’s Ceiling?

Here’s what we know about UFC middleweight champion Israel Adesanya: he’s an absolutely incredible and creative MMA fighter with some of the most impressive and awe-inspiring standup skills in the history of mixed martial arts.

Just three years into his UFC run, Adesanya, who is a perfect 20-0 in his MMA career, has won 9 fights in the Octagon, finishing four opponents via knockout, en route to claiming the unified middleweight title, defending the belt twice so far.

Adesanya is a special type of athlete, and showman, claiming seven fight-night bonuses during his UFC run, delivering some of the finest performances and fights in recent memory, all while talking the talk. And a very colorful smack talk it is.

However, for this fight against Blachowicz, who claimed the light heavyweight title last September at UFC 253, Adesanya has been quieter than usual, concentrating on the massive task at hand, which involves moving up a weight class and fighting an opponent who will be roughly 20 pounds heavier on fight night.

The fight is intriguing for so many reasons, but the focus remains on Adesanya’s speed and agility versus Blachowicz’s sheer power and strength. It’s a fascinating matchup that could result in “Stylebender” taking a tactical five-round decision, or, conversely favor Blachowicz to win via stunning knockout.

All the pieces are in line to deliver a memorable fight, but more than anything, this has the potential to boost Adesanya’s star and legend further into the stratosphere as he aims to claim champ champ status. It’s also an essential win should he continue to aim for a fight against Jon Jones after the two spent months exchanging unpleasantries in a very visible social media spat.

There’s no doubt that Adesanya needs to win this fight in order to continue his pursuit of all-time greatness, and, in many ways, this is the biggest test of his MMA career.

Here’s the deal. It’s not Amanda Nunes’ fault that she’s so damn good at MMA fighting. And, it’s not her fault that no one has been able to touch her since she lost her lone fight in the Octagon back in 2014.

Sure, Germaine de Randamie gave her a bit of trouble back at UFC 245, but for the most part, Nunes has been untouchable for the last six-plus years, and it doesn’t seem like she’ll face the most difficult opposition at UFC 259, as she enters this featherweight title defense as a -1000 favorite to Megan Anderson’s +650 underdog status.

A winner of 11 straight fights, Nunes’ is already a UFC Hall of Famer on account of beating the likes of Ronda Rousey, Meisha Tate, Holly Holm, Cris Cyborg and Valentina Shevchenko (twice). She’s won five fight-night bonuses during her UFC run, recording seven knockouts and two submissions. Those are pretty staggering numbers, honestly, and it already feels like she’ll run away with this one on Saturday night.

Anderson does have some points of intrigue in this bout, mainly her size advantage. Standing a full six-feet tall with a 72.5-inch reach, Anderson is by far the biggest opponent Nunes has faced inside the Octagon. However, that appears to be the only place Anderson has an edge in this one.

Having already lost to Holm and Felicia Spencer — a pair of fighters that Nunes took out with ease — Anderson doesn’t seem to have too many paths to victory at UFC 259. So, while this may feel like a bit of a mismatch, just enjoy the fact that the greatest woman to ever compete in MMA (Nunes) is fighting, and hope for some sort of spectacular finish.

For years, most pundits have claimed that the UFC’s lightweight division is the promotion’s deepest and most talent rich division. But those tides seem to be shifting of late, with the men’s bantamweight division drawing immense intrigue among diehard fans.

With names like Cory Sandhagen, Rob Font, Jose Aldo, and Cody Garbrandt all near the top of the division, bantamweight has been on fire for the last few years, during which champion Petr Yan and Aljamain Sterling have proven to be the cream of the crop. And, while Yan may not yet be a household name, he’s on a path to becoming one of the UFC’s biggest breakout stars of 2021 on account of his vicious and punishing standup style that relies heavily on his technical boxing, but also on his crafty ability to mix kicks in with his punches, often hiding the leg strikes behind his dangerous hands.

However, before Yan can reach that next level of notoriety, he’ll have to face a very game and very dangerous opponent in Sterling, who, no doubt, owns the grappling edge in this one.

Riding a five-fight win streak into his first UFC title shot, Sterling, who is 11-3 overall in the Octagon, is a tremendous wrestler with some wicked and diverse submission skills. Seriously, all four of his UFC submission wins have come via different techniques, including a Suloev stretch and an arm-triangle from the bottom, which are the very type of finishes that give Brazilian Jiu Jitsu nerds fits.

Still, it is Yan who enters UFC 259 as the champ and the favorite, so it’s his fight to lose.

Let’s call this a classic striker versus grappler matchup, and realize that this fight is competitive and alluring enough to be a main event, but in this case it’s just one of three title fights on the UFC 259 PPV main card on ESPN+.

The Rest of a Very, Very Deep Card

Aside from the three title fights, it’s tough to say what is the most intriguing fight on the UFC 259 card.

No doubt the PPV opener, which features Thiago Santos and Aleksandar Rakic, a pair of proven light heavyweight finishers, will be one hell of a fight, and then there’s the second fight of the Pay Per View, which seems Islam Makhachev, the close friend and training partner of lightweight champion Khabib Nurmagomedov, going for his eighth-straight win in the Octagon, when he takes on Drew Dober, who’s riding a three-fight knockout streak into UFC 259.

And then there are the prelims …

Just before the UFC 259 PPV goes live from the UFC Apex in Las Vegas, former bantamweight champion Dominick Cruz takes on a surging Casey Kenny in the final preliminary fight, plus China’s Song Yadong looks to remain perfect in the UFC when he faces The Ultimate Fighter veteran Kyler Phillips. Perennial flyweight contender Joseph Benavidez also returns to action for the first time since July, taking on Askar Askarov, a deaf fighter who is on the cusp of earning a flyweight title shot.

Literally every single one of these fights is worth tuning in for.

There you have it. UFC 259 is one pretty sick fight card. It’s an event that has a bit of everything and is definitely worth your time on Saturday night.

So, tune in, if you dare, or if you just want to be entertained by a bunch of world-class fighters beating each other up for your enjoyment. It’ll be great. I promise.