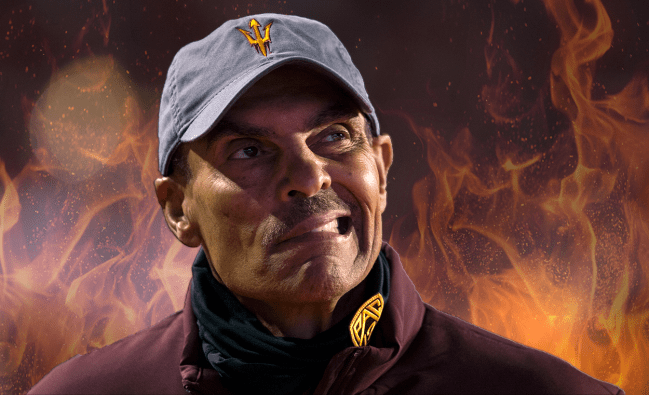 Arizona State has had a tumultuous offseason. The Sun Devils are in the middle of an NCAA investigation, many top players have transferred out, and multiple coaches have been fired.

Not only is the program in chaos off of the field, it has not found a lot of success on the field in recent years. Arizona State has not won more than eight games since 2014 and the team has been consistently inconsistent under head coach Herm Edwards.

The Sun Devils look unbeatable one week and then look like they could care less in the next week. Coupled with the NCAA investigation and the issues it has caused, things are not going well.

Edwards remains the head coach in 2022, but his future is very up in the air. And there is not a lot of hope that things will get better.

In fact, opposing coaches are not holding back on the terrible state of the program.

An excerpt from coaches in this year’s edition absolutely went in on Arizona State.

“This is the biggest dumpster fire in college football. It’s absolutely mind-blowing that Herm [Edwards] is still employed, at least in the mind of the college coaching community. Everyone knows it’s a ticking time bomb, but nobody knows if it will be a month or a year from now.”

“They look like a mid-level SEC program when they get off the bus, and you start to see what they’ve been recruiting. Then you finish the game and it’s liking playing a Mountain West Conference team. They are wildly inconsistent, they turn the ball over and they make mental errors. It’s all stuff that screams instability. We’ve played them when they are locked in and physical and we’ve played them when they are just not interested in being there.”

There was one coach who did not tee off, but did not have any praise.

“The Herm plan isn’t terrible. Bring in the CEO head coach to work externally, and let talented assistants coach. But they did not follow any of the rules. That model had to be adjusted from the NFL to college because there is way more to screw up here.”

But the anonymous coaches did not stop there. Another went on to say that he thinks it is unfair that Edwards still has his job while the coaches around him were let go.

“It’s embarrassing he still has a job when some of those assistants are still unemployed and bearing the brunt of things he directed.”

Another coach went so far as to say that the program is a waste.

“The program has the best chance of total implosion midseason because there is no consistency anywhere; not in the coaches, the head coach or roster. It’s a waste. The program is always good on paper but fails to ever really win consistently, and this is another example of it.”

To make matters worse, this was the most neutral things that the coaches had to say.

I always like to remind readers: As a rule I throw out the most positive and most negative comments. This is what was left for ASU https://t.co/ZtBMRxfqwJ

Will Edwards and Arizona State prove the haters wrong? Maybe. Is it likely? Probably not.