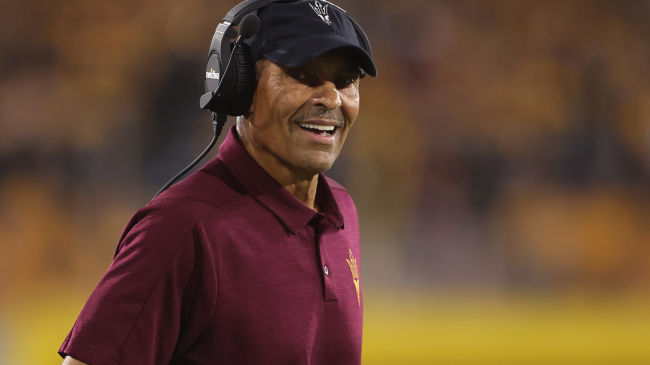 It’s possible he was fired before he even made it off the field following that embarrassing loss.

When all was said and done, Edwards finished with a 26-20 record in Tempe, winning six games against ranked foes and beating rival Arizona each of his four seasons at the helm.

The 1-2 start to this season was enough to give him the boot, though. It’s possible that the odds were stacked against Edwards from the get-go in 2022 though.

A report from The Athletic suggests that there were some in the Arizona State athletic department giving opponents intel on the Sun Devils from within.

“An opposing coach recently told The Athletic that it wasn’t hard to get intel on this season’s team because some within Arizona State’s athletics wanted a coaching change.”

Edwards certainly rubbed some of the staff and fanbase the wrong way as he was fired while the school was in the midst of a recruiting investigation. But to have folks supposedly on your team giving tips to opposing coaching staffs because they no longer wanted you leading the program?

The accusation had many on social media talking.

Herm Edwards may or may not have made it through the recruiting scandal with a job, but we’ll never get to know with the head coach being fired midseason. And accusations that those inside the Arizona State athletic department could’ve helped speed that firing process up have garnered attention.

Some feel bad for Edwards, who as mentioned before, was 25-18 entering this season and had knocked off a number of quality foes.

This fan wrote, “Sounds like Herm was hamstrung by the school and we definitely don’t know for sure if he was a bad hire.”

Sounds like Herm was hamstrung by the school and we definitely don’t know for sure if he was a bad hire.

Others felt bad for the players on the team. If these claims are true, they were never really given a chance to win this season.

“This is wild. Sucks for the players that members of their own staff helped opponents,” this college football viewer posted.

This is wild. Sucks for the players that members of their own staff helped opponents. https://t.co/NYrBFGLstl

Edwards is now out of a job, but what, if anything, will happen to those accused of leaking information?

This fan said, “If it’s true that there were people within the organization leaking information to opponents, they should lose their jobs immediately.”

If it’s true that there were people within the organization leaking information to opponents, they should lose their jobs immediately https://t.co/pByLgLFjUw

It’s not yet known who will replace Herm Edwards at Arizona State, though there are already a few big names being mentioned. Hopefully, the new hire doesn’t make any enemies inside the athletic department.