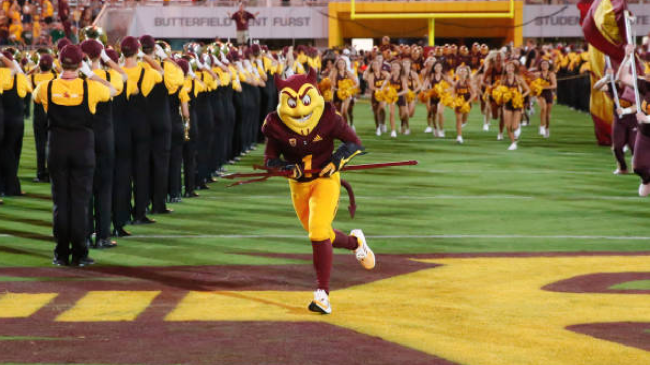 It didn’t take long for head coaching positions to open up in power 5 conferences this season. Nebraska fired Scott Frost last week after he led the team to a home loss against Georgia Southern in their 3rd game of the season.

Now the PAC-12 has seen it’s first vacancy of the year. It was announced on Sunday that Herm Edwards would no longer be the head coach at Arizona State after an embarrassing home loss against Eastern Michigan in a game where the Sun Devils were favored by nearly 3 touchdowns.

When he was hired, Edwards was expected to elevate an ASU program that had spent the previous few seasons hovering around .500. It just never happened.

Now the program is seemingly in worse shape than when he arrived and fans are losing interest in the team. The situation puts a lot of pressure on Arizona State to get their next coaching hire right and bring in somebody the fan base can get excited about.

Yahoo’s Dan Wetzel has suggested that there is a coach who could step up to the FBS ranks to take the job and get ASU fans excited about the program again. He believes Coach Prime could be the answer for the Sun Devils.

Arizona State’s football search should begin with one man: Coach Prime, who is uniquely qualified to potentially awaken a giant https://t.co/wfixDTdbMi

While Coach Prime doesn’t have any FBS coaching experience, he has quickly found success in the FCS. He led Jackson State to an 11-2 record last season and has them out to a strong start this year with a 3-0 record.

Deion Sanders could fix one of Arizona State’s biggest problems

The hiring of Herm Edwards came with the expectation that he’d be able to turn the Sun Devils into a regular in college football’s top 25. Unfortunately, appearances in the rankings have remained rare in Tempe and there is an obvious culprit. ASU has only had one recruiting class in the top 25 since Edwards was hired.

Deion Sanders is a prime candidate to change that. He has shown that he can build a program through recruiting at Jackson State, turning he program into a powerhouse in just a few season.

Maybe Deion Sanders really is just what the Sun Devils need to turn things around next season.