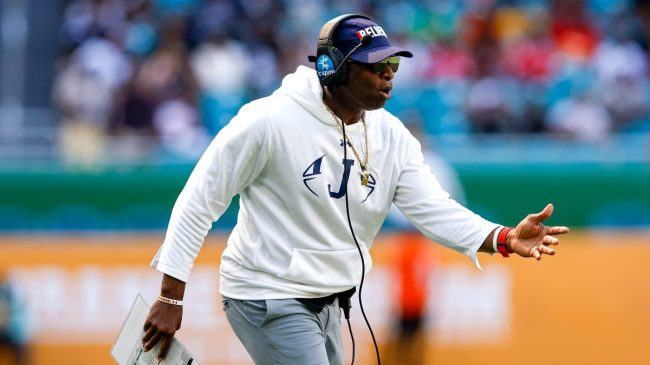 In the ever-changing college football landscape, it’s looking like HBCU programs are changing too. Deion Sanders has made plenty of noise being the head coach of the Jackson State Tigers and he’s only in the second year of his coaching career. We’ll see how it plays out but after a dominating display of football, HBCUs may never be the same all thanks to Sanders.

Deion Sanders Is Changing HBCU Football Programs For The Better

Jackson State absolutely ran away with it on Sunday after defeating the Florida A&M Rattlers 59-3. The Tigers looked substantially better than their opponent, so much so, that they might be able to compete with some of the best programs college football has to offer. Deion Sanders has done a stellar job in recruiting as his team is incredibly stacked for the 2022 season.

It helps he was able to persuade Travis Hunter to attend Jackson State instead of Florida State. The top cornerback recruit went ballistic in his first game of the season, per 247 sports. Having Deion Sanders coaching him up is obviously going to pay off in the run long. Additionally, he claims “that Hunter was probably ’60 percent’ healthy after dealing with an undisclosed injury all of preseason camp.”

HBCU sports programs have struggled to reel in top talent throughout the years as they don’t have the same appeal as the top dogs in college football. However, it appears Deion Sanders’ star power is leveling the playing field.

We could see a major power shift as HBCUs become more legitimate in sports. That can be especially true once some of these top recruits, like Travis Hunter, get selected in the early rounds of the NFL Draft. If that’s the case, then Deion Sanders is shaking things up in a major way.