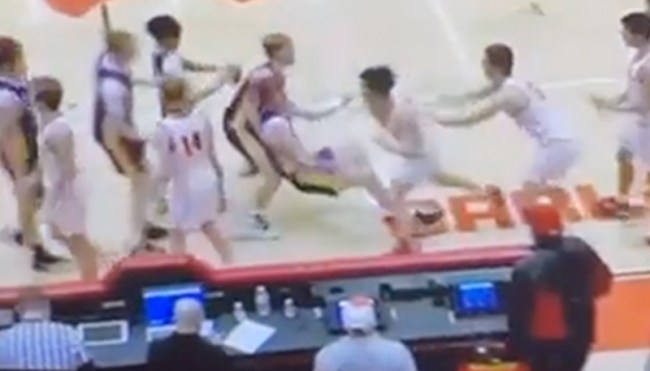 The Iowa high school basketball player who sucker-punched his opponent after a recent game is facing serious jail time.

Last week, a video showing a player straight up knocking out his opponent during the handshake line at a high school hoops game went viral.

According to TMZ, the 17-year-old player in question has been arrested and charged with a felony that could put him in prison for 10 years if convicted.

According to court documents, officials accused 17-year-old Carter Prenosil of knocking out his opponent after the Carlisle vs. Nevada hoops game on Tuesday night in Iowa.

In a video of the altercation, you can see the attack was violent — with the alleged victim appearing to be KO’ed on his feet.

According to the docs, the player suffered a concussion and a cut to his mouth that required four stitches.

Cops — who were in attendance at the arena — say they launched an investigation … and ultimately arrested Prenosil on Wednesday. He was later charged with felony willful injury — causing serious injury.

Prenosil is facing up to 10 years in prison if convicted on the charge. He’s due in court for a hearing on the matter on Dec. 13.