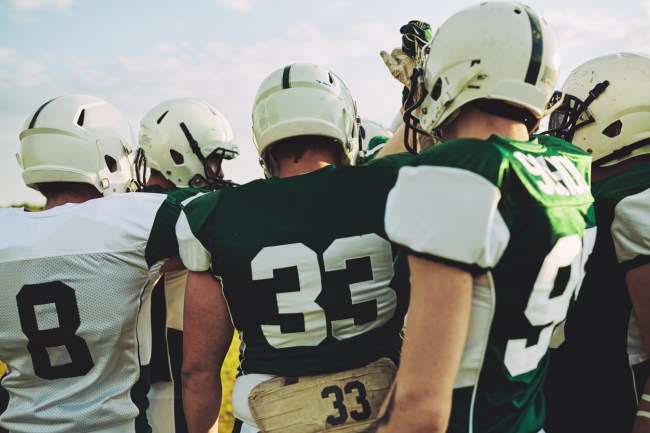 My whole life I’ve secretly resented my parents for naming me ‘Matt,’ the name equivalent of a warm can of O’Doul’s. Every time I tell someone my name, it sounds like I just stepped on a Lego piece barefoot: ‘MaAatt.” God, I’m such a loser.

But the buck stops with my future born children. No more generic, mindless names. And today I’ve gotten inspiration from a young quarterback from Cornerstone Christian High School in San Antonio, Texas.

And no, this is not a drill.

Tonight on Maximum Sports: Football has become a family business for the Booty family. Now at @CCS_Warriors, a 3rd generation quarterback (@GeneralBooty2) gets a chance to make his mark while playing for his dad. Story tonight on @KABBFOX29. pic.twitter.com/RP6cC1i7iV

Booty is a 6’3” quarterback entering his sophomore year at Cornerstone Christian, and if his lineage is any indication, we’re going to see ‘Booty’ on the back on an NFL uniform in the mid-20s.

“General has a blood line that you need to follow closely. His mother is the sister of Joe Ferguson, a long time NFL quarterback with the Buffalo Bills and Detroit Lions,” [Texas QB coach John] Jenkins said. “He (Ferguson) played about 20 years in the NFL. His granddad, Johnny Booty was one of the highly recruited quarterbacks coming out of America years ago from Shreveport Woodlawn, which is the same school Ferguson and Terry Bradshaw (NFL Hall of Fame – 1989) went to.”

“His dad (Abram Booty), who I still think holds records at LSU for receiver, is an NFL guy. His uncle, John David Booty played in the NFL and Josh Booty, his uncle, was in the NFL and played Major League Baseball.”

Check out Booty’s highlight reel when he was just 13 years old.

“He’s (General) got size and has huge hands like a first baseman’s mitt. He is about to come into his own,” Jenkins said. “This is just a heads up on him. He’s going to be a good one. This kid has NFL stamped all over him.”

Could not be more here for anything than a star quarterback named General Booty. https://t.co/dRFVP4ym2F

I found you general booty
get it together and throw it back to me
hit the slant route for a first down or two
put some zip on it then see what it do https://t.co/yK7vYisgka

“And it looks like coach is going to make a change at QB and send General in. Yep, he’s definitely making a Booty call.” https://t.co/CqT5Bbe7WG