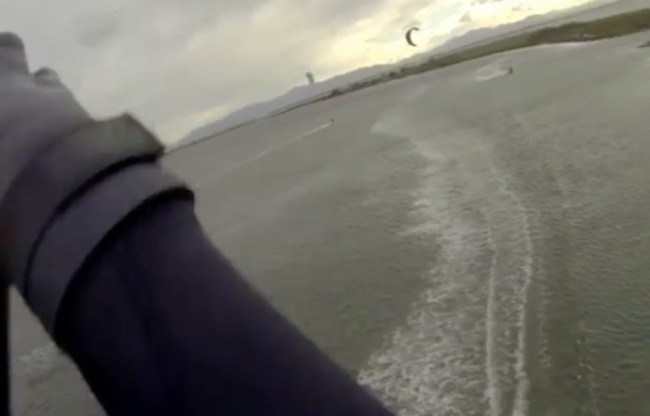 Before you get out there and do some kiteboarding yourself it’s ALWAYS recommended that 1) you take a lesson from an instructor and 2) you start on the beach without the board attached to your feet. Why? Becuase things can go wrong in a hurry for kiteboarders when the wind’s ripping real hard.

Case in point is this clip I first came across over on the Instagram account @KookSlams (the same one Adam from Workaholics was giving the shout out to this season), but KookSlams found the video via Kevin Hoorens. If Kevin’s Instagram feed is to be believed, he’s a seasoned kiteboarder who knows his way around the water. That’s just one reason why this absolutely insane crash is all the more spectacular:

I wouldn’t say that I’ve witnessed an exorbitant amount of kiteboarding crashes in my day but I’ve certainly seen more than your average citizen. I’ve spent some time watching kiteboarders tear it up near the Sunshine Skyway Bridge in St. Petersburg, Florida and watched all of them eat shit at one point or another. But I’ve NEVER seen anyone get as high as this bro good in that video, and I can’t even imagine how his body felt when he came down…Complete devastation.

For comparison’s sake, I Googled ‘highest kiteboarding jump ever’ and found this world record set at an unbelievable 790ft high:

These kiteboarders are nuts.